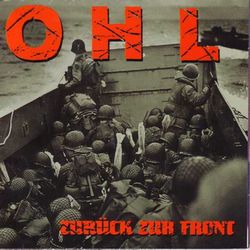 An extremely merciless, razor-sharp riff bursts out of the speakers. The uncompromising attack called "Hell wie tausend Sonnen" does not only benefit from the full-length's excellent production (pay attention to the brilliant snare sound) which hits me vehemently. It also makes clear that we are back at the frontline of OHL's never ending war against the enemies of democracy. After seven years of silence, the formation reappears and, good news, its fighting spirit is still unbroken. With songs like the overwhelming opener, the pugnacious dudes demonstrate sustainably that they are willing to break through every enemy line, and due to their arsenal of weapons - read: song material - I have no doubt that they will survive.

This time mainly the neo-Nazis appear in the hair cross of the permanently combative band. Song titles like "Keinen Führer keinen Gott" speak for themselves. OHL always keep the proper distance to those unteachable creatures who still think that uncle Adolf's so-called ideology was the be-all and end-all. "Deutschland 2003", for instance, depicts a manifesto against radical nationalistic ideas. Moreover, two songs deal with the turning point of World War II and in particular the cruel and nightmarish "Der unbekannte Soldat" glitters with very strong chords and some morbid trace elements. Unlike the second song (the hyper-fast closer "Stalingrad") about the catastrophe of the fawning general Paulus, it expresses at least a modicum of compassion for the soldiers who had been sent to death by a merciless and ultimately misanthropic regime. Therefore, I prefer this mid-paced track, because it offers a certain depth.

Nonetheless, it goes without saying that the high-speed outbursts also enrich this comeback. Especially "Gott mit uns", the first song of the second half, is on an equal footing with the perfect opener. Whipping guitars drive the song forward and they do it at lightning speed. OHL always reach their top form as soon as they combine ingenious riffs with an extra portion of velocity. "Der Preis der Freiheit" is the third song which confirms my thesis. It is almost even better than the opener and I guess this alone speaks volumes. No doubt, this irresistible outbreak of fury was obviously created to break necks and I guess it has been already successful in a lot of cases. (My neck is still on my shoulders, but I have lost many brain cells while banging to this guitar inferno. Well, it doesn't really matter due to my low intellectual power.)

Generally speaking, the less rapid pieces do not stand in the shadow of the fiery orgies that celebrate velocity. But I cannot hide the fact that the anti-socialist "Hammer und Sichel" or "Ein Volk ein Reich ein Führer" (which is, of course, a song against ultra-nationalism) are not able to challenge the rapid highlights, because their slightly ordinary guitar work does not make my day. But the melody lines of "Der Morgen gehört uns" show that mid-paced numbers can be great as well, in particular due to the fact that they somehow remind me of some harmonies of The Ramones. I am not quite sure whether the role models from New York have been an influence for OHL, but one thing is for sure: there exists a certain spiritual relationship between these bands. Everybody knows that Johnny Ramone was a very conservative and pretty stubborn patriot, while his "brothers" had a completely different point of in view in terms of politics. Not to mention Dee Dee's pronounced affinity for Germany which shows up in many tunes of the Ramones, inter alia their final number "Born to Die in Berlin". And sometimes it seems as if Deutscher W. alone embodies all these political tendencies, but he always keeps away from violent extremism. Thus, he appears to me like someone who is in a (very) critical solidarity with his homeland. Just listen for example to the lyrics of "Mit dem Rücken zur Wand". This is the tenth track of another great album which is called... but I guess that's another story.