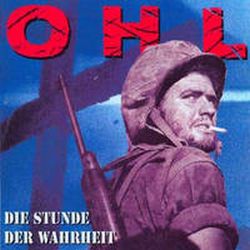 In 1996, OHL informed us that Die Stunde der Wahrheit ("Hour of Truth") had begun. The band with the more or less militant image released an album crammed full of 16 songs. Usually, I am skeptical whenever it comes to such a configuration. But in this case, my distrust was unfounded. In spite of its almost opulent length of 46 minutes, the album avoids lackluster pieces. All songs are equipped with concise riffs, leads and lines, they do not lack substance and they come directly to the point. And it goes without saying that the currish band still has a message, even though the dudes are not on any kind of mission. Fortunately, they are no preachers, but they do not shy away from clear statements and that's a good thing. Be hot or be cold but avoid being lukewarm.

Based on a powerful, well-defined sound, the songs can develop their full aroma. OHL find the right balance; on the one hand, the album scores with its homogeneity, on the other hand, the single tracks do not suffer from a lack of individuality. For example, "Die Wirklichkeit" thrives on its dynamic intensity, while "Sei still" rather shines with the crunchy main riff that mirrors musical inelasticity. Although their stylistic frame does not leave much wiggle room, the four dudes find options to vary their approach without violating the guidelines of the genre. Given this situation, it comes as no surprise that all somewhat crude and slightly amateurish elements of their early outputs do not reappear here. The album sounds almost polished and the songs have a smooth flow, but this does not mean that the necessary combativeness and harshness are missing. Despite the comparatively clean production, the album spreads an aggressive mood. The battle tested soldier on the cover does not promise too much. As a marginal note, this is no German soldier. I know that you were aware of this fact. I just wrote it, because some people have nothing better to do than blaming OHL for being Nazis. Courageous, sometimes anonymous anti-fascists! Frankly speaking, they are as strange as their counterparts on the other side of the political spectrum.

Speaking of strange people, Hanno Kress from the Rock Hard magazine was one of these persons that thought they must blame the band for the lyrics. She was of the opinion that "Die falsche Front" could have been written by Manfred Kanther, a very conservative law-and-order politician. But this was cheap polemics from someone who did not know how to fill the white sheet in front of her. (And it was an irony of history, that exactly this so-called law-and-order politician was later sentenced to a fine for having misused money...) Be that as it may, much more relevant was the fact that OHL's mix of metal and punk sounded fresh, lively and uncompromising. Even more than 20 years after its release, Die Stunde der Wahrheit still scores with these traits. Okay, if we want to scrutinize the album with a very picky mindset, we can moan about the fact that the record does not hold real earworms. But I hope you agree that this is not the crucial factor for an album at the interface of two non-conformist styles. Anyway, if you want to hear an earworm from OHL, I recommend listening to "Warschauer Pakt". This is the eighth song of another great album which is called... but I guess that's another story.