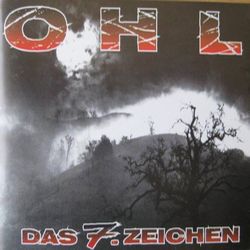 I really like Metal-Archives, even though some decisions of the capable and busy admins remain a mystery to me. OHL is "Accepted based on Die Auferstehung"? Come on, dudes, have you ever heard Das 7. Zeichen? The power chords at the beginning of "Blind und taub" or the brutal riffing of "Falsche Demokratie"? Das 7. Zeichen holds metallic elements in abundance, although it is a matter of course that it cannot hide the punk-dominated past of the band. However, one thing is for sure: the album from 1994 is one of the gems of OHL's discography, not least because of the lyrical content. Four years after the fall of the wall, OHL rage against the regime of old asshole Erich's GDR. A handful of songs deal with this topic, but OHL also do not turn a blind eye to the right-wing extremists. Two iron fists on the back cover smash hammer and sickle as well as the swastika and this is nothing but logical in view of the lyrics, even though OHL do not forget to raise the voice against ultra-religious weirdos, too. (Too bad that 72 virgins did not fit on the back cover.) Finally, the lyrical content of "Die Frau" is completely irrelevant, but this does not affect the very good overall impression.

The music does not stand in the shadow of the lyrics. OHL present themselves in a well regenerated condition. With freshly charged batteries, they fire 16 songs into the crowd and this is almost too much of a good thing. If I could erase one or two songs, Das 7. Zeichen would be a perfect album from my point of view. Nevertheless, there are a lot of jewels to discover. "Helden für immer" reminds us of Graf Stauffenberg, the head of the conspirators who tried to kill Hitler on 20 July 1944. The riff is dashing forward, the chorus keeps sticking in the brain in a matter of seconds and the tempo changes are well executed. This song borders on speed / thrash metal, other cross this boundary with great naturalness. "Der Fall Saatze" (great lyrics about the unscrupulous "jurisdiction" of the GDR) or "Sag die Wahrheit" demonstrate Nuclear Assault-compatible thrash metal at its finest. All these short, compactly designed, riff-driven eruptions keep the listener under tension. Mid-tempo parts like the beginning of strong and dynamic "Spirale der Gewalt" are quickly blown away by the next high velocity outburst. OHL present an extra portion of aggression and intransigence and have forged an impressive number of highlights.

The production does not deliver this almost murderous degree of pressure and sharpness which gives their modern albums the finishing touch. But this is not to say that Das 7. Zeichen suffers from a mediocre mix. The album shines with a proper guitar sound and the drums also give no reason to complain. The pinpoint vocals round off the sound profile. Without revealing an overdose of compassion for anyone, Deutscher W. offers his street philosophy in the proven way. So, I always feel satisfaction whenever the album clocks in at 40 minutes. Back in 1994, OHL showed that they are still a force to be reckon with and their further career has confirmed this statement convincingly. So, lend an ear to Das 7. Zeichen or other well-designed tracks of the band, for example "Die rote Flagge". This is the opener of another great album which is called... but I guess this is another story.