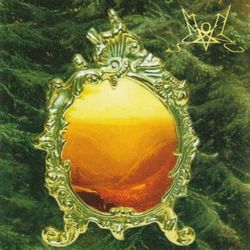 In general, Summoning are able to paint large pictures that impress with strong colors and great depth. Lost Tales, as much as I regret it, does not show the Austrians in top form. I don't want to say that they offer typical EP stuff which was not good enough to become part of a regular work. Both tunes show the well-known configuration of Summoning tracks and do not present obvious flaws. Nonetheless, they just pass by and especially the opener suffers from expressionless melodies. Too soft, too harmless, too lame. Usually, the powerful vocals act as a kind of corrective to the endless keyboard lines, but on Lost Tales only somewhat sleepy narrators raise their voice. The songs are dominated by the instrumental, pretty repetitive sequences. That's the usual formula of Summoning, no doubt about it. I just miss some trace elements of harshness, especially, as said before, the raw vocals. Furthermore, the opener holds some sequences where flickering keyboard tones meet a sedative background melody. These parts could have been taken from a high-gloss polished discotheque of the late eighties. From my point of view, these sections are pretty misplaced.

"Saruman", the second and last track here, possesses roughly ten percent more vigor and more drive. Honestly speaking, it also cannot challenge my personal highlights of Summoning's back catalogue. For example, a track like "The Passing of the Grey Company" shines, among other things, because of its slowly growing intensity, while "Saruman" flows almost phlegmatically on one and the same level during its entire playtime. Regardless of this fact, the melodies of this track indicate the actually great skills of the artists at least to a certain extent.

And what about the sound? Production-wise, Summoning avoid any kind of disharmony. The mild sound puts the focus on warmth and transparency. However, a fitting sound does is never able to make mediocre material great. Given this situation, I recommend picking out one of their regular albums, if you want to make the first steps into their musical cosmos. All of them are better than Lost Tales. whose stylish artwork remains its greatest advantage.