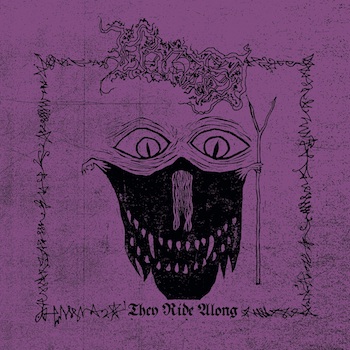 The arcane winds of old black metal blow furiously through all seasons it seems. Hagzissa graces the blackest paths of the underground with their first-full recording titled They Ride Along. I don't know much about the band, but they definitely know how to invoke the incense of ancient roughneck ritualistic black metal. This one went through multiple spins because it’s a blasted awesome release for a debut. Permeating is a good sense of aggression matched with a radiating glare of obscurity and devilment. Occult by philosophy and rugged by musical technique, Hagzissa has dipped their heads in a deep well of disaster and mystique in unholy self-baptism. They lay within the wisdom of first wave black metal while giving the finger to the spiritually naive with their thrashing and punky approach to the ritual. Undoubtedly one of the best records played within the ceremonial mist of the ancients. Going balls-out with a whapping 40 minutes to clarify any misconceptions you may have had about their music, Hagzissa instill a definitive sense of anger and pandemonium when playing the rites of their black mass. March to the sordid hymns of spiritual captivity and be drawn in by the trancing shore. They Ride Along is sure to meet your demand for occult first wave black metal if you attend Hagzissa's sermon.

As someone often seeking records that use a primitive approach, I was more than pleased to see this show up. For many 'primitive' is often mistaken for mediocre and yes I would agree with some statements pointing to bands hiding under the 'primitive'/'organic' moniker as an excuse for their beyond pathetic attempts at making music. However, to achieve a stripped-down feel does not mean conforming to mediocrity, rather, taking your instrumental proficiencies for a ride without training wheels aka 'pro tools' gives the listener a sense of sincerity; a priceless property that cannot be faked. No drum triggers on here, no cheesy choruses, only heavy fucking black metal executed with care for the catastrophe. Stapled deep with thrashing hostility comes They Ride Along; striking the match with 'Die Pforte (A Speech Above the Moor)', Hagzissa's blaze across the prestigious black metal spectrum had begun; the discomforting, sudden shifts in harmonies and overlays of fiery guitar licks, sweep cleanly through to the final track. Proceeding onward to 'Moonshine Glance (An Iron Seed in Our Sour Soil)' and 'Searing Effigy', the feeling Hagzissa had been building towards their best often came as thought due to the thrills they offer. The songs prior were good but seemed to be hinting towards better installations to follow. That is precisely what happened; with 'Moonshine Glance (An Iron Seed in Our Soil)' leading the way and setting the stage for tracks like;'They Ride Along on Howling Winds' and 'The Nightshade Wilderness'; tracing the inscriptions thus accomplishing adhesive harmonies and transitions that would become dominant qualities of Hagzissa's debut forward-on.

For a 40-minute journey of witchery, the music does not appear to be a cluster-fuck of mashed together sessions; contrary to such, they emanate a cohesion of sorts, that in turn makes for an intimate experience when listening. The sagacity of Hagzissa emits with every song; in fetching the task of keeping the music within the confines of black metal glamour and recondite; the mechanism put to the test has emerged with admissible results while submitting before the truths of the genre. And while many may be trying to take advantage of this latest reemergence of classic black metal, you will in time see through the disguises of those not fully committed to the yore of nights long gone. This conclave of musicians guided by the hand of darkness have done a great favor to the underground and black metal in particular; with post-this and post-that and all the other shit trying to quell the mighty spirit of black metal, it’s good to see some are still in attendance to the lure. They Ride Along is a disciplined craft fit for the ears of those who prefer the genre in its original state.