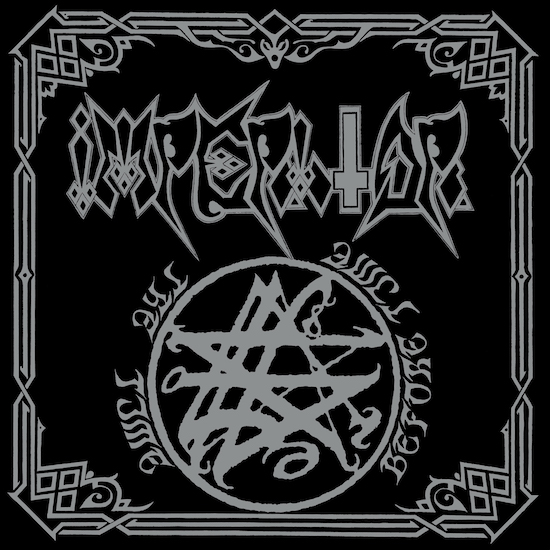 Death metal music is, by and large, a Swedish or Floridian undertaking that seemed to have spread out among the globe in seemingly slow, yet interesting plateaus and into relatively 'sterile' areas. Once the initial fires were lit, the bands playing similar music seemed to just come out of the proverbial woodwork to present their musical wares. Criminally undervalued was Poland's contribution; the bands that seemed to emerge from the Eastern European country were just as viable as their more 'known' contemporaries: Ghost (the real deal, not our B.O.C. friends from Repugnant), Ahret Dev, Imperator, Trauma, Dies Irae, Vader are the bands most known for setting the standard over there, and, sadly, aside from the legendary Vader most of these bands are vastly unknown by the general metal populous, or the music is so out of print that the prices to obtain them are usually a week's paycheck. In typically noble fashion, Nuclear War Now! has reissued Imperator's classic album, The Time Before Time, and they couldn't have picked a more important album to reissue because more people need to hear this incredible record.

Originally released on Faceless Records in 1991, The Time Before Time was initially supposed to be released by Deathlike Silence Productions, Euronymous' fledgling label in Norway, but it wasn't meant to be. For years it has been on every extreme metalhead's want list, commanding ridiculous trophy-hunter prices across the board (thankfully a lovely Polish girl sent me a copy for the price of $15 USD many moons ago). Seeing this back in print makes me happy that the music will finally be heard as it was meant to be heard and not through some compressed, inferior mp3 files.

The Time Before Time kicks off with “Eternal Might,” which immediately pulls Slayer into my head, circa Hell Awaits. There are many thrash elements viable and discernible in Imperator's music, but the underlying death metal feel is central to the thick, crunchy sort of sound most DM fans have come to know and associate with the genre. The music on Time doesn't really invoke feelings of death or evil as much as it does just a sentiment of haphazard, down-tempo brilliance. It doesn't follow a set or familiar pattern in terms of the album's aura as a whole, which is part of its long-standing charm. The tempo shifts so evenly and within every track, you can enjoy the entire album without losing track of it, i.e. the flow is sickeningly disrupted or uneven – it never is. There is also a very low, dense feel to the tracks, especially evident in “Ancient Race,” which combines the better elements of death metal with its mid-section trampling over imaginary plains towards wars unknown. I've always held this record in high regard because of it's seemingly effortless use of musical visages, especially in my favorite track, “Love is the Law (Love Under Will), that pounds into your cranium like a slow, plodding jackhammer. This is the one track that literally defines the genre in which it rests, complete with a familiar gallop riff perfectly interspersed without overkill.  These vocals of a throaty, almost barking order are just the perfect fit for Imperator's caustic air; when the album closes with “The Rest is Silence,” it's the perfect climax to an already intense experience. this band has been disgustingly ignored for far too long!

I can imagine that some traditional death metal fans might be put off or otherwise unimpressed with the casual approach to death metal from these guys, but you'd be doing a massive disservice to yourself if you allow such an immense piece of work slip by unnoticed. In my humble experience, music, especially metal, as a constant whole always has a centralized, organic feel to it, largely dependent on its geography and era. This is evident in everything from opera to pop, to classical to metal; it's a visceral, yet often ill-examined anomaly that seems innocuous enough. I think once more people master this nuance of musical enjoyment, a new and exciting world opens up, and it's never the same. Poland's death metal underground was just as vital, just as deadly, and just as well-crafted as anything out of Sweden, Germany, the Netherlands or North America. They captured a sound...a very honest and homegrown feel that you just recognize when you hear other Polska bands.

Imperator finally gets its due, and here's hoping a new generation of fans finds them as amazing as some of us did way back when. It's a damn fine piece of work!