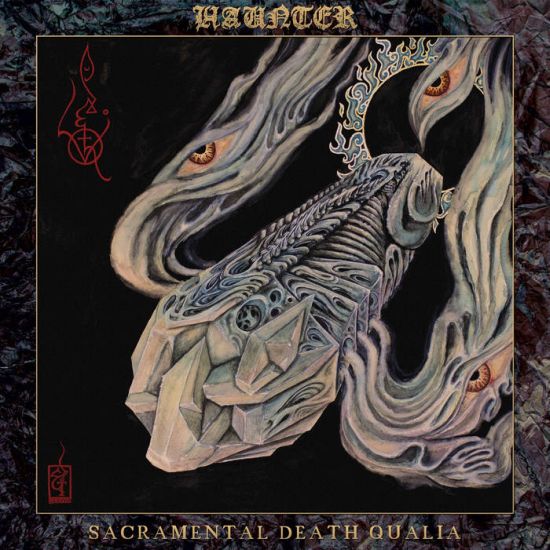 While overall a great label, I sometimes feel I, Voidhanger Records can be a little too weird for their own good. Their focus on unique, unsettling sounds means you’re guaranteed an acid trip of an album with every release, and more labels should definitely draw from that approach, but a lot of times what’s great on paper translates musically to albums that have a lot of curious stuff going on, but lack the riff base to properly ground that stuff. Panegyrist and Howls of Ebb are two good examples of that, and Spectral Lore loses me at times as well. Ambition has a downside, you can try and cover too much ground in the process and end up sounding like something that’s trying to be too many things.

Haunter is different, though. They have a full sound that has a much more natural interplay between instruments than a singular vision tends to have, which immediately puts them in a different ballpark than stuff like The Wakedead Gathering and Tchornobog. Not necessarily better or worse, just different. In addition, Voidhanger appears to build a lot of their bands from the ground up, whereas Haunter already caught a bit of buzz with their first full-length before they were picked up by the label. Again, neither an inherent good nor bad thing, but just a few characteristics surrounding the album that put Sacramental Death Qualia in a completely different context than what you may have come to expect from Voidhanger. Haunter is still definitely very weird and unique, but they never seem to strive for weirdness. This album is very organic in execution; the creepy dissonance and long, eerie acoustic passages sound incredibly purposeful and are extremely well integrated into the more discernible melodies. Putting it simply, Sacramental Death Qualia has meat. Dissonant, spooky, delicious meat.

The production is a lot smoother than it has been for the band in the past, which does remove a bit of the raw, unhinged power that Thrinodia had to it, but replaced is a focus on an atmosphere that is as uncomfortable as it is entrancing. 'Dispossessed Phrenic Antiquity' wastes no time in immediately hitting you with a morbid yet slightly math-y death metal riff, which is refreshing because atmospheric bands like to do long buildup intros most of the time, but I almost wouldn’t have minded it because the non-distorted melodies on Sacramental Death Qualia are fuckin excellent. The long, lighter guitars (found most notably in the second, third and final tracks) seems to hang above the music and create several melodies out of the overlapping reverb, mixing creepy yet consonant textures together in consistently stimulating ways. Some people might think they're a bit overlong, but I'm so enthralled by them the whole time that I don't even care. The riffs play with lots of different textures, but never to the point where they sound disparate from one another. Everything ties into the tense, creepy theme, only making it more intricate. It’s like marveling at someone’s beauty and then watching them die two minutes later.

As good as the cleaner parts are, though, this is a riff-focused album, never content to stick to one riff for too long, with every new riff bringing an off-kilter yet catchy bend. Haunter’s sense of melody is at once original, catchy and immersive, which is enough of a reason to check this out, but all of my little imaginary boxes are checked on top of that: the vocals are sometimes buried, but never overtake the mix and come into the foreground at the right times. The drums are notably skilled while tasteful enough to remain in the background, and the way the instruments feed off of each other is addicting to listen to. Normally when I review albums I score them based on two things: one, how long I can listen to the album without getting sick of it, and two, if I do have to leave the room or take my headphones out, how compelled I am to pause it. I can listen to Sacramental Death Qualia several times in succession and still want another go, and I’ve always paused it so far.