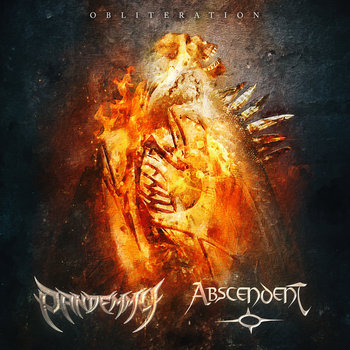 Buy on: Bandcamp
Type: Split
Release Date: May 30th, 2019
Label: Independent
Genre: Death, Thrash
1 Monstera
2 Fear Of Choosing A Side
3 Unwitnessed
4 Withholding
5 Them Not Me (Motorhead Cover)
MetalBite on YouTube

Splits are usually a good way to explore collaboration between bands from different parts of the world creating something unique together. I love splits as it’s almost like a friendly competition between bands that gives the opportunity for a band that is famous to highlight one that is not, or both to be discovered by new listeners. But in this case, it fails to impress.

Starting with Pandemmy's side of things, I must begin with the awful, horrible and disgusting sound of the vocals here that pierce my ears in the worst way possible. I don't know if this vocalist sings usually like this but its kind of like metallic high-pitched whistle sound. I feel the same effect when somebody is scratching a chalkboard with their nails till they crack and bleed every time she opens her mouth. Here is the music and sound being discussed (as I am not trying to disrespect this woman in a personal way or in any way) and this is just awful, and big part of this must be (and I hope so) production's side responsibility. This vocalist is whistling her vocals and distracts me from everything I can try to bear here. Sounds completely amateurish, I don't understand how she was allowed at all to perform if this is her best and hopefully its not. Thankfully the guitarist took over the vocals on future releases which improved that listenable part highly.

Leaving all aside, music here is competent but extremely predictable and overdone melodic death metal that sounds like it comes from 90s Gothenburg and not Brazil (where they are actually from). Sad, as the country has managed to output awesome bands like Sepultura, Soulfly, Cavalera Conspiracy, Sarcofago, Ratos de Porao, etc. All of them managed to make an statement with their music in their genres, making something different, incorporating traditional sounds or breaking the established boundaries, like Sarcofago influencing Mayhem to do the second wave of black metal (we could argue that they were the actual first ones to do it, with corpse paint, blast beats and general imagery). We can hear clearly the influences from At the Gates, early In Flames, etc, and they are a bit too obvious and something that is a big low point of this side of the album or any band that struggles to find their own identity looking up unnecessarily high at their idols without questioning anything.

The drums are solid but, a bit generic, have nice fills, ok production, but maybe the high hat is a bit saturated on the mix, making it sound a bit too noisy (does not sound loud but the gain may be a bit too high on the mic recording it) losing and missing the real beautiful complex tones of this part of the instrument. He follows and plays along pretty well, but again, it sounds like generic death metal drummer no. XX. Nothing special on that part but well played and clean. The guitars are ok, with interesting leads over the music, nothing original but the knowledge is there, headbanging inducing but with shy and timid approach. The bass is not present, as I can’t hear it not doing anything more than just following everything mindlessly (and plus, buried in the mix). The songs overall feel just like a filler or opening band material at best and that's really unfortunate as I had high expectations from a band from Brazil as I am a big fan of music from this country. The intro is completely unnecessary and does not add anything, more than wasting the listener’s 1:50 minutes of lifetime.

This country is filled with highly influential bands, but this side of the split doesn't do anything for me or to the genre in any way. The musicianship is there but not the creativity, and that is a bit sad in that regard.

On the other hand, we have the Abscendent side of the split, making the same mistake with the useless intro, but musically is a tad more interesting and engaging. The bass is very present and playful with the drum base. It almost makes the guitars sound in second place (structurally) which is interesting. Nonetheless, don't get your hopes up as the whole thing has no substance in general. Overall, everything has a really simplistic composition and a messy structure that sounds rigid; without thriving and expecting too much from the listener, to oversight the mistakes done without doing the job to analyze them before releasing the pieces to the public. It sounds like half-finished songs, that were going on a good way, but they were 15% complete. It misses so many details that i can't stop counting the part that sound cringy, and amateurish.

The vocals are also horrible, but not to the point of physical torture like the other band. This vocalist lacks power and the vocals sound like a small miniature puppy being a bit grumpy at the unknown visitors, they are almost cute. The guitar leads on the other hand are above average and the true potential behind all this; the solos are beautiful and emotional, but sadly too good for the songs. They are technical in some spots but a bit too chuggy on the main parts, hitting the same note as a base for everything and playing along that the whole way. A bit disappointing in that regard as the potential for this guitarist to explore is there, but it's almost like something or someone is holding him back to do so and keeping him in that “safe” spot. The choruses on the songs are also not memorable, just there for the sake of it, as most of the music it seems.

Both albums sin pretty much in similar regards, and i wish that this review could make them evaluate their work. There are two cover songs, and unfortunately they suck too. They are the best songs on the album though which is deplorable.

Not recommended at all...