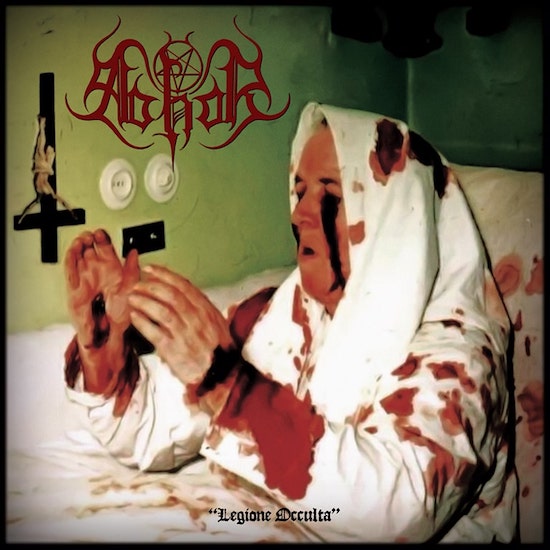 Two notorious bands conspire to bring a haunted dirge to the congregation, Abhor keeping the pyres lit since 1995 with their frightening black metal, and Abysmal Grief since 1996 has been waltzing within the mist of the funereal. Two tracks of twisted black metal and one 13-minute episode of paranormal doom metal activities signal a sealed pact for eternity. Those who know Abysmal Grief are aware of the highly respectable music within their collection; and as for Abhor, the same can be said. Both of these bands are genuine at what they do and how they conduct themselves within the space of black and doom metal, so a gathering such as this is bound to make airwaves.

Abhor instills the fear by means of strong tracks showing that they are still a hungry coven of musicians. Both songs demonstrate classic black metal structures with much replay factor. Their use of keyboards gives the tunes a deepening feeling of fear and helps to meld the different tempo changes and instrumental patterns occurring on 'Possession Obsession' in addition to the overwhelming aura of horror. Abhor is a band that understands how to use multiple techniques to conjure an overwhelming sense of uneasiness. Legione Occulta does an exceptional job of mixing the musical competencies of the band with an exorcism sample. This adds to the tone and the overall feeling of the record; and with the vocals being a blend of creaking eerie black metal shrieks the immersion factor is doubled.

Abhor brought an outstanding performance on their side of the split and more-so built the setting for what had been left to be put in place by Abysmal Grief through means of Ministeriium Diaboli. In keeping with the theme of horror, the feeling of dread is prolonged and amplified through samples and very 70s occult/horror keyboards and organs. Though a 13-minute track that has an interlude lasting roughly 8 minutes; it drives the immersion factor to a higher level as it climaxes towards the actual music, which is a combination of unsettling ghastly whispers and screams amalgamated by fantastic instrumental use particularly in the guitar section where the soloing is concerned. The track is a fabulous conclusion to the split record between two giants within their respected crafts. And though being two diverse bands the music contributed by each party creates a sense of wholesomeness and connection, thus displaying a potent unity.

This split between Abhor and Abysmal Grief is one to have, both bands brought with them the excellence they're known for.