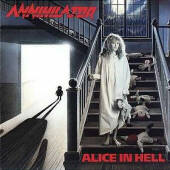 Flotsam and Jetsam started with two very strong releases. Therefore, they were well respected and seemed to be on right way. Yet with their third full-length, they committed suicide without stopping the further release of meaningless records. Just like lemmings, they were blind to their fate. Excuse me, what do you say? This review is not about Flotsam? It is about... Annihilator? Eh, please wait a moment... (sheepish smile), indeed, you are absolutely right. I am sorry for that.

However, it doesn't matter. The introduction is still valid. Just replace the name Flotsam and Jetsam by Annihilator and everything is fine. All broke down when Annihilator published Set the World on Fire, a lukewarm and pretty commercial output. But this work is not the topic here. Alice in Hell was not a typical thrash debut, because it was not based on the somehow fascinating mix of vehemence, velocity, naivety and unconcern. Annihilator put the emphasis on a partially more technical way of thrash. The quasi-title track shows this approach among other things in view of a short intermezzo that seems to send greetings to Mercyful Fate. I would not say that it is a progressive song configuration for a thrash album, but an unusual one. Compare it with the following "W.T.Y.D." and "Wicked Mystic". They are predominantly straight, direct, compact and more energetic. Especially the first one is driven by an ingenious riff and it scores with another catchy chorus. Its weird guitar solo does not destroy the focused overall impression. This track marks a highlight, while the more famous "Alison Hell" leaves me nearly completely cold. Its trickier song pattern fails to convey emotions.

The B side does not possess a comparable track. Despite some mid-tempo parts, for example in "Ligeia", the entire material puts the main focus on speed and energy. The riffs are mostly brilliant, the voice of Randy Rampage does not lack charisma and each and every song seems to be written by an experienced bunch of musicians, not by debutants. Waters has penned smooth yet powerful tracks with a very lively aura, which stand on their own feet. Of course, they fall under the category of thrash / speed metal, but they do not need a shoulder (of Metallica, Testament or anybody else) to lean on. Every riff sounds fresh and autonomous. The fantastic closer brings the album to a triumphant end but tracks like "Word Salad" do not pale beside this final attack. Okay, sometimes Waters enjoys his own solos a little bit too much, but generally speaking, the songs themselves - and not the narcissistic excursions of the band leader - play the main role.

The nine compositions benefit from a very good sound. Maybe it is a tad polished, but that's not at the expense of its penetrating power. The album sounds clean, but not sterile, and everything is well balanced. In terms of its technical implementation, Alice in Hell is on a par with genre classics such as "Bonded by Blood" or "Forbidden Evil". Annihilator gave their homeland Canada the technical component and this was a good addition to the rumbling sound of Exciter, the rather simple speed of Razor, the crude humor of Piledriver and the anarchic noise of early Voivod. This debut catapulted Waters and his sidekicks on the radar of almost every thrasher and the scene was curious about the next steps of this new force. Only the dudes of Flotsam and Jetsam had something better to do. Back in 1989, they had already begun to sell their souls to the industry.