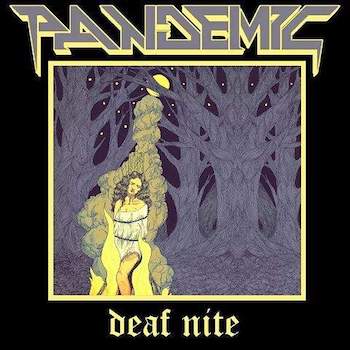 Poland's Pandemic offers up their first foray into the thrash metal arena by way of Deaf Nite, a rather safe and inoffensive toe-in-the-water for these guys.

Truthfully, I'm a student of the very first rumblings of thrash, circa 1983 with Show No Mercy by Slayer, followed closely by Metallica, Celtic Frost, Kreator, Destruction, Sodom and the like.  I've seen every genre come, stick around, get watered down, then wade on life support in the last near-40-years, and in all of my experiences thrash is the one-dimensional bastard child that seems to keep coming back, usually to dull or bland fanfare and efforts. I'll be honest, Pandemic's first EP is okay, but flawed -  nothing more, nothing less. While devoid of the tempestuousness of a Slayer or a Kill 'em All-era Metallica, there isn't exactly a 'happy thrash' sterility that covers the recording, so that's a qualified plus.

The initial chords of “Pandemic” sort of glide into the ears with a sort of heavier NWOBHM sound that doesn't necessarily follow that typical pattern. The main verse riff is interesting, albeit somewhat rehashed from parts known and unknown. That said, it's not exactly a bad thing; if you're going to offer up something old with a twist, it's best to follow the masters before you and try and put your spin on it. The mix is actually very good; every instrument is popping nicely without overstatement or pomp, especially the bass. It's a very even sound throughout, which is another plus. So far, so good.

The vocals did me in. They seem to change with every track, which is rather distracting. The delivery on the opening song is pretty solid; nothing grand or really new, but strong and somewhat interesting. When the title track kicks in, the vocal lends itself to a very stale, almost underwhelming tonal blandness. I'm not sure why the style changed here, as I could easily hear a more powerful delivery with some balls behind it doing so much more for this track, especially with the lines, “Burn in hell!” Somehow it just doesn't sound convincing when there aren't really passionate feelings behind it, and I don't hear that in here for this otherwise promising track. “Total Battery” seems to try to make up for the lackluster delivery of its predecessor, and it improves a bit, but it almost seems a little much in its hyperactivity. The real issue is the ending track, “Warpath.” I have no idea what the hell was going on with these vocals. The high-pitched 'squealing' of the verses, followed by an almost constipated delivery of the bridge is just comical. The chorus isn't terrible, but the high-pitched breathy second try almost sounds like Beaker from the Muppets (look him up if you need a reference), and it kills an otherwise solid song base. The music is fine, the vocals shifting like a schizophrenic jaunt through an abandoned movie theater just killed it for me. I just found too many things bothersome to really enjoy it like I should.

What might have otherwise been a pretty promising EP was marred by inconsistency, and I'm hoping to hear something a little more tweaked the next time around. Not too bad for a first effort, but room for improvement is both necessary and gently advised.