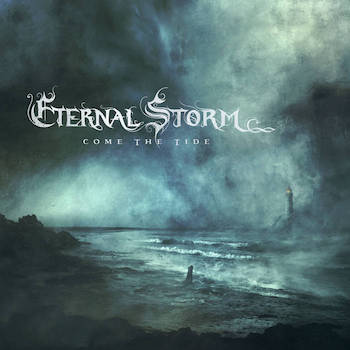 As the melodic death metal scene collapsed after some years of success, it was clear that the surviving bands or the new ones were going to struggle to gain the same recognition. The positive aspect of this fall in disgrace was that the new projects were actually going to try to forge their own sound, without being obsessed to copy what the leading bands were doing at a certain moment. A fine example of one of these interesting projects is represented by the Spanish band Eternal Storm. This project was founded in 2009, though the band members have needed ten years to release their debut album. In this period of time the band has released an EP and a split album. Moreover, as often happens, the project suffered several line-up changes, which are always problematic. Anyway, the hard work has paid off and the band managed to catch the attention of the underground label Transcending Obscurity Records releasing in 2019 its first effort entitled Come the Tide.

Eternal Storm proposes a pretty elaborated form of melodic death metal with a strong atmospheric touch in the vein of bands like Insomnium, one of the finest examples of how melodic death can still be an interesting and touching genre. Come the Tide is a long album clocking almost one hour of time, with songs around 6 minutes. This detail clearly shows that the band likes to compose songs with variety and interesting structures. The band's compositions flow between the most aggressive sections, with fast drums, powerful riffs and remarkably strong growls performed by Kheyron, who sadly is no longer in the band, and calmer sections which are tastefully introduced. The high and lows in the song’s pace sound awesome and make the songs a very exciting experience. Technically speaking, the band members sound very skilled, as the guitar patterns have some elaboration and richness, fluctuating tough different ranges of riffing styles. We could say the same about the drums which sound technically impeccable and varied. One doesn't need to seek deeply in the album to fine great examples of this technicality and quality, as the album opener itself, called 'Through the Wall of Light Pt.I (The Strand)' shows the impressive potential of this band. The calmest sections can appear as a bridge between different heavier sections, commonly in the form of delicate guitar chords, or as an introduction of the song. This happens with the second track, where we can even listen to a saxophone, a surprising add which works fine in my opinion. In this as per other compositions, we can listen to some clean vocals, which are also pretty solidly performed. It seems that the band has used some guests in order to enrich vocally this album, complementing the aforementioned excellent growls, which nevertheless play a major role on this album. Even though I wouldn't define this band as progressive, the clean vocals, some guitar chords, especially those we can listen to in certain tranquil sections, and looking how the songs evolve, it's undeniable that the band has a progressive nature in its music. This progressive touch is present in the way how they try to create songs with an evolving and rich nature.

In conclusion, although Eternal Storm spent a long time to release this first opus, Come the Tide is unquestionably an impressive first album due to its variety, quality and richness in its compositions, with a tasteful balance between a straightforward fury and a melodic and atmospheric mood. Therefore, this album should appeal not only all the melodic death metal fans, but all the metalheads who want to enjoy an inspired and excellent metal album.

Eternal Storm has a varied and interesting melodic death metal sound on Come the Tide.  At times I felt like I was listening to an Opeth album with all the dynamics present, but at others it felt more like a typical Insomnium album.  There is a good deal of harsh singing on the album and it complements the whirlwind of sounds that the band projects.  The variety present is definitely one of the high points.  The melodic death metal sounding portions of the disc were done expertly and sound catchy and impactful.  There are some heavier and lighter sections that surround this and make the album more complete sounding overall.

The singing is very harsh at times and wouldn’t be out of place on a brutal death metal release, but it’s a compliment that it manages to mesh with the melodic death metal sounds of this band.  There have been a number of melodic death metal albums from this year.  I believe this to be the most varied and second best after Soilwork’s album.  It’s definitely a strong album and gets consistently more involving as it progresses.  It also goes to show how much of a strong genre melodic death metal has become recently with excellent albums emanating from this genre each year. The band still does not match the best of the genre and feel a little worn out by the time you’ve listened to the whole album.

Though it’s not perfect, this is some of the better music from the melodic death metal genre I’ve heard in quite some time.  It has enough twists and changes to make it solid and the subtle moments are done very effectively.  Songs like the two part Through the Wall of Light make their presence felt.  Come the Tide gets a solid recommendation to melodic death metal fans.