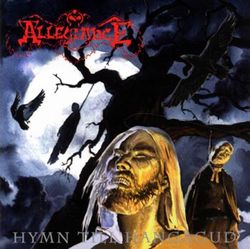 Albeit my brain cells rot every day a little more, I know for sure that the debuts of bands such as Exodus, Venom or Slayer have been released more than 30 years ago. This is a somewhat uncomfortable feeling, but not really shocking. On the other hand, I always fear the moment when I realize that a comparatively "new" record has already celebrated its 20th birthday as well. That's exactly the fact when it comes to Hymn Till Hangagud. Don't be confused by the inferior artwork, the music itself is free from any type of infantile elements.

The combination of black and death metal can work excellently - and it can be a total failure, too. Here we have the situation that the black components gain the upper hand and some atmospheric Northern melodies interrupt the fanatic and fast sections. "De nordiska lagren" has such less violent moments that make the difference. I confirm without hesitation that the Swedes are able to write very strict, exciting sequences which pass by like a bullet train. High speed eruptions shape a lot of parts of the material and they sound impressive, nevertheless, it is good that they are contrasted by the more ponderous rhythms from time to time. The nasty nagging of lead vocalist Bogge accompanies both forms of musical expression appropriately, but despite his robust performance, he is always at risk to be killed by the voluminous instrumental section. Massive and impressive, these are the terms that describe the sound fittingly. Hence, the output scores with depth, atmosphere and brutality. No doubt, this mix puts the mighty material into the right light.

The fluid transitions between the single songs create the feeling of listening to a kind of extreme metal opera. Crude experiments do not disturb the homogeneity and some medieval sounding tone sequences in "The March of Warlike Damned" remain the most extraordinary element. Greetings from Desaster! By the way, the aforementioned track is the longest piece of the album and it houses a huge number of different sections, but it does not suffer from too complicated structures. This is definitely a strength of this debut: monumental patterns give room for many variations without leading to incomprehensible results. The dudes avoid repetitiveness, only the closer relies mainly on one single riff. But it is a real monster riff and due to the slowly growing density of the track, "Spjutsången" marks a fiery end, melancholic yet extremely heavy, combative and fatalistic. The galloping, neighing horses at the end of the song bring the listener directly into the archaic battle and supporters of Necrophobic or Marduk will love to take part in this bloody contest.

Hymn Till Hangagud united very raw vibes with an enormous level of musicianship. Due to its very strong substance, it clocked in at 47 minutes. I am still a fan of this awe-inspiring, stormy and thrilling debut without any fillers. It catapulted the self-confident dudes from Söderköping on my pretty long list of highly interesting formations. Albeit quality beats quantity, it is too bad that the band created only three full-lengths. Worse still, even their "youngest" record is already 19 years old. Shocking.