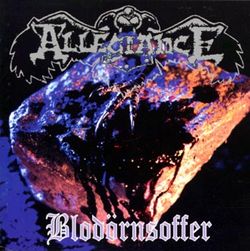 M-A says that the status of the band is "unknown", but this seems to be a euphemistic statement. It's a fact that Allegiance did not release any new material during the last 19 years. Even 30 years ago, Mister Dickinson told us that only the good die young and this might be the reason why he and me are still living, but honestly speaking, I wish also the good would reach a high age. Enigmatic doctrines aside, Blodörnsoffer, which is kicked off by a nice, stage-setting intro and finished by the second part of this atmospheric piece, does not mark a monumental milestone in the history of Swedish black / death metal and it should not compare itself with the debut. Nevertheless, genre fans are well advised to lend an ear, because the band presents passion, vitality and robustness.

The Scandinavians plough through heavy soil. Their songs spread the smell of hard work. Soft guitar interludes give the listener the occasion to gasp for breath, but the songs themselves are characterized by viscous, thunderous and almost lumbering riffs and lines. The pretty smooth flow of some parts of "En svunnen tid" remain an isolated case. By the way, this excellent, partly wistful yet extremely heavy song marks the climax of the material due to its effective opening riff and the brutal beauty of the melody that appears after four minutes. Too bad that there are no further tracks which reach the formidable quality of this song. The remaining material sounds angry (or even very angry like the title track), powerful and it does not lack high-speed eruptions. To give but one example, wide parts of "Heimdal" pray to the God of velocity. However, it bares its teeth without suffering from any signs of fatigue, but one has to realize that the band itself had set the bar very high with its outstanding first full-length.

Not very transparent, but lumpy, vehement and uncompromising, that's how the album's sound can be described. Too bad that the word "dull" also fits the context, too. Meteorologists would probably speak of a hail storm of exceptional severity and this means that its appearance limits visibility. No, the sound does not fully meet my taste, because it lacks clarity and precision. I don't want to complain too much, because it does not drive the album into the ground, by far not. Even the bass is audible, and we know that this is sometimes no matter of course. Yet it would have been fine to listen to a better-defined sound. However, the balance between the vocals and the instruments gives no reason to lament. The hateful nagging does not steal the show from the instrumentalists and vice versa. Okay, the throaty style of singing of the lead vocalist borders on monotony, but this kind of music does not ask for virtuoso opera singers.

For sure, Allegiance do not make great mistakes, but a great opening riff like that of "Korpen skall leda oss" would have deserved a better continuation. This song represents an example of the lack of catchiness and sharpness that prevents a higher rating, although there are some very strong instrumental sections as well. But I don't want to look for the fly in the ointment - and I wish the status of Allegiance would change into "active".