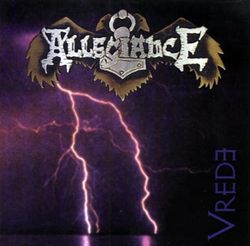 The debut was a killer, the successor a good work and the third album still makes fun, although the excellence of the first output does not reappear. Vrede, the farewell work of Allegiance, mirrors the features of every former work of the band, too. The songs don't lack substance, the basic mood is archaic and dark and domineering vocals accompany the instrumental thunderstorm whose harbinger is depicted on the artwork. Vrede reinforces the tendency to Viking metal, but do not fear any form of folkloric "ohoho" choirs. Allegiance use only the most extreme Viking elements. The basic structure still consists of black and death metal. Admittedly, the dudes do not mix these genres with the precision of Necrophobic, but they also avoid overly rumbling sounds.

Generally speaking, the three Swedes combine raging parts with atmospheric, melodic and mostly melancholic sections. The furious sequences prevail, but sometimes it was no good idea to integrate a very calm break, for example in "I som drogens hårt med döden". By contrast, "Norden Fäder" does not suffer from an abrupt interruption, but its rather tranquil flow fails to make my pulse run faster as well, although some good, somehow Northern melodies are included. Allegiance are proud of their origin and they follow their natural instincts. Moreover, the album benefits from the good technical skills of the single musicians. Each of them plays his part tightly and Fredrik Andersson, the Marduk veteran, guarantees the sufficient degree of heaviness. Even though Vrede does not shine with a flawless and totally clean production, it is getting obvious that a berserk behind the drums motivates his comrades to a great performance. Inter alia his restless double bass in "Hedna stål (Hymn till nordens hjältar)", a majestic yet very vigorous piece, leaves its mark - but unfortunately, this track surprises with a very harmonic intermezzo after three and a half minutes as well before it regains pressure and heaviness. Vrede is a good work, nevertheless some small deficiencies cannot be ignored.

The charismatic, raw vocals of Bogge are sometimes much more brutal than the instrumental offering. He expresses both hatred and venomousness and sometimes I miss him during some pretty long instrumental parts. Nonetheless, I admit that these sections are never repetitive or lukewarm. More or less everything makes sense on this record and anything else is a matter of taste. The aforementioned "Hedna stål (Hymn till nordens hjältar)" proudly presents an excessive playtime of more than eight minutes, but in view of its various, sometimes dramatic sections, it is definitely not too long. There is something dangerous in the sticky air and the song delivers the soundtrack for the imminant demise.

"Skymning", the dreamful outro which is based on large-formatted keyboards and soft guitars, seems to remain the final sign of life of Allegiance and this is, despite a few weaknesses of their final full-length, a pity. More robust, honest and a tad apocalyptic albums of these competent Swedes would have been great. Well, M-A says that they are still active. So, let's see. Hope is the last thing I lose.