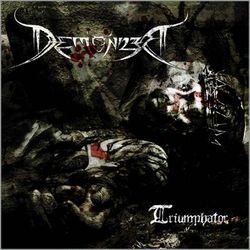 It's a pity. Since the beginning of my puberty, I always wanted to become familiar with each and every detail of a "Bestial Ejaculation" and finally, Demonizer have made an eponymous song. But it is the closer of Triumphator, their third full-length from 2007. I therefore have to listen to the other eight songs before I get the highly appreciated information. Of course, I could skip these songs, but I grew up during the vinyl era and I am a traditionalist! This means that patience is needed. Anyway, this is no text about sperm, erections or beastly dicks, so let's speak about the album as a whole.

Demonizer from Belgium mix black and thrash metal in a dynamic and fast-paced manner. Their riffs are sharp, aggressive and challenging. This is no frills metal, because the dudes like to go straight ahead without integrating any non-essential gimmick. If they are really totally crazy, they throw a solo into the song ("The Wolf Inside" or the title track, for example) and that's it. However, they demonstrate their true strength whenever they drive down the highway of Satan in a straightforward and reckless way. The triumph of Triumphator is based on the lively guitar work (which avoids stale and worn riffs) and the energizing drumming, while the hoarse voice is nothing to write home about. Finally, the quality of the album is a result of the cleverly arranged tracks. Despite the rather simple approach, Demonizer's songs do not suffer from a badly executed verse-chorus-verse scheme. Maybe the last iota of catchiness is sometimes missing, but the tracks are definitely coherently designed. Especially the first half of the output boasts with energetic eruptions.

The pretty shabby yet powerful sound reflects the filth of the compositions. The guitars dominate and sideline anything else, but the overall picture is still acceptable. Doubtlessly, transparency and precisely defined instruments were of minor interest during the recordings. But frankly speaking, this does not bother me, because this kind of music asks for a certain amount of dirt. So, don't be fooled by rather poetic song names like "Bright the Stars Must Shine Tonight". Demonizer do not worry about romantic things. They live in a dark side street, where Aura Noir or Gae Bolga are their neighbors.

While listening to the album from the beginning to the end (and while waiting for "Bestial Ejaculation"), I realize that the dudes could have offered a little bit more variety. On the other hand, they have a clear vision of their musical direction and I am not speaking about an overly monotonous record. I am just somewhat overburdened to mention its highlights, because the single songs rather form an appropriately nasty unit. Even the promising closer does not separate itself from the other numbers. (I am slightly disappointed about its rather stupid and misogynist lyrics.) But this fact can be understood in a positive way as well, because Triumphator is free from any kind of fillers or lukewarm placeholders. The Belgians perform nine strong numbers and even the second half of the record achieves a good quality level. Perhaps they should have written two or three more refined numbers, but the musicians show that they master their core competencies excellently. My only pain is that I still have no reliable information concerning bestial ejaculations.