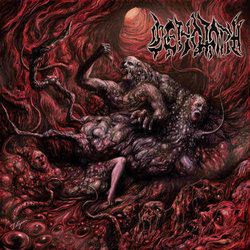 I never really dug into this album until a few months ago when I finally gave it a full proper listen, and my god, this blew me away! Aside from then, the only time I heard this album is when I was just getting into Cenotaph, where at that time I had only been interested in the albums Puked Genital Purulency, Reincarnation in Gorexctasy, and Putrescent Infectious Rabidity; where for when it came to this album, I only skimmed a few songs and didn't think much of it.

This album is straight fire from beginning to end. This album has a heavy-staticy-raw vibe, and it's all over the place, in your face, relentless, and very brutal indeed! The drums in my opinion are the best part about this album. They have a pummeling raw brutal sound, the kick drum sounds just perfect, and the playing is full of skill. Aside from the constant blast beats and fills, the drummer implements some jazzy patterns and structures as well, which makes for a great listening experience. Most the songs on here got your usual BDM drumming, along with some cool ass innovative jazzy-type stuff. Very very awesome.

Guitars sound great. Along with the drums they got a raw vibe that also sounds slightly grindy and loose. The riffs are great, and the musical content presented here isn't tedious nor boring. The vocals done by sole original remaining member Batu are still great, just as they were when the band first debuted. His vocals on past albums have had more of a late era Disgorge sound, like how the vocals are on "Parallels of Infinite Torture", but with some more girth and strength. On this record he still sounds just as good, but he changes it up a little. Its more growl based and less guttural and meaty. Change is good, and the subtle change in his vocals here are cool.

Overall, every area and aspect of this album is awesome and doesn't fail or lack power. You got your heaviness which is accompanied by awesome songs, great instrumentation, consistency; everything enjoyable is here. This album legitimately makes me feel happy and energetic. It's incredibly catchy and upon listen it'll keep calling you back for more once you're finished with it. All the songs are nutty, and every member does their part greatly! Can't find a single negative part about this release anywhere at all.

The band hadn't put out an album in 7 years, and with a huge comeback releasing an album like Perverse Dehumanized Dysfunctions, they've proven that they're still brutal, active, and not dead. Every second of this album is enjoyable, fun, and once again; brutal. If you're on the search for some good newer brutal death metal or are just a fan in general of this genre, I definitely recommend this album right here. Cenotaph are and will remain the Turkish kings of brutality!