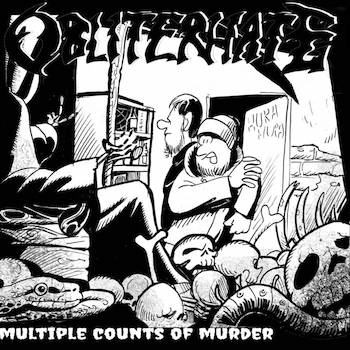 I understand Obliterhate is currently on hold, that's disappointing to hear because Multiple Counts of Murder is a promising debut record despite an unwanted factor. It lies somewhere between mid-90s and early 00s death metal sonically, the only drawback about this record for me is the programmed drumming. Usually if I discover the drums are programmed on a record I avoid it by all means, but in Obilterhate's case, I was willing to look past that because of the cartoon artwork on the album. What I found buried amidst the cardboard programmed drumming is a sincere aim at establishing Multiple Counts of Murder and the name of the band as a serious undertaking. Obliterhate showed that despite the lack of a real drummer, they were compelled to make an album that possessed most of the necessary ingredients to be a competing force amidst recognized names of the genre.

The vocals and guitars play their roles so well that the absence of a drummer rarely ever crosses the mind of the listener; the manual music does a considerably good job of hiding that missing element. Songs like “Broken Arm of Mortality”, “Gutten” and "Cannibal” reveal a purpose hidden below the computerized drums as though knowing there is something not favorable with the music but still managing to play with a straight face. Decent vocals (in the form of throaty grunts), good guitar leads, and solos give the music some amount of depth, though not the best organization of lyrics as they sometimes sound crammed into the music and off-beat/out-of-sync at times, a sense of genuine care still manifests throughout the 33 minutes on Multiple Counts of Murder.

Commendable song structure and variation that equally rivals the thrashing also makes its presence evident further giving Obliterhate credibility in the midst of the unfavorable but necessary drum programming. More about the automated drumming; it's nothing a decent extreme metal drummer can't play; I say this because I’ve heard computerized drums on records that are noticeably challenging to play live and is often the case with many bands. I'm glad they did not go crazy and create an overly technical album that would make it even harder to find a capable drummer. Fortunately, the mechanical drums don’t obstruct the music as much as I thought it would, all thanks to the heavy emphasis on the guitar distortion on the songs that drown a fair amount of that clappy double bass.

As mentioned earlier, Obliterhate is currently in some form of hiatus, as all of the musicians involved are active participants of other extreme metal groups such as Devilpriest (fantastic band), Imperial Sin and Izurus; therefore, exclusive commitment to the project is currently not a possibility. However, if they do decide to reactivate their engines for new Obliterhate material, I hope they do so with the aid of a real drummer. Multiple Counts of Murder shows good prospect for a debut release and begs to be challenged by future efforts under the Obliterhate moniker. Multiple Counts of Murder is much of a presence alerting album that leaves room for a subsequent body of music.