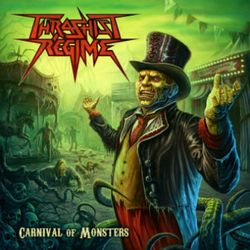 I like heavy metal, because it can be pure energy. Maybe I fall victim to my own taste, but from an objective perspective, thrash metal is the most energizing sub-genre. Thrashist Regime - I don't disclose the secret which style they prefer! - hail from Scotland and inject the listener an extra dose of energy. They convey liveliness and a positive sort of unsteadiness. Their restlessness seems to be the main driver of their musical creativity. So, come on, the Repka-esque artwork does not promise to much. Given this situation, let's raise the curtain for Carnival of Monsters.

Generally speaking, Thrashist Regime have a feeling for proper riffs and they are aware of the fact that velocity should not be neglected. This does not mean that the album is free from minor flaws. Sometimes the dudes get lost in the complexity of their own compositions, for example the opener lacks compactness. A good song and anything but insubstantial, yet a little bit too long. "Colossus", equipped with a brilliant opening riff, also slightly derails. An orgy of riffs can be wonderful, and the formation avoids meaningless sequences, but sometimes less is more. The short infusions of adrenaline called "Antarctattack" and "Headshot" show how it can work very well. Indeed, the majority of the songs scores with straight parts that release a gigantic power, inter alia due to the fantastic, perfectly balanced production. It lends tracks such as "Megalomaniac" the maximum pressure, because it's vigorous and robust while mirroring the enthusiasm and the joy of the five freaks. Thrash metal from the UK often has a funny note, just think of Gama Bomb, Acid Reign or Lawnmower Deth. Never forget that "Weebles Wobble but They Don't Fall Down"! Either way, Thrashist Regime don't take themselves too seriously and this gives the work a likeable touch.

Joe Johnston, the bald-headed lead vocalist, has a strong, pretty charismatic voice. He sounds neither demonic nor inhuman, but he masters all challenges with his "normal" voice in a very convincing manner. He also avoids high-pitched shrieks, but I don't miss them at all. His comrades support him with some precise background shouts and so the vocal performance stands the test. The same goes for the instrumental contributions. As far as I can, the band members do not lack musicianship and technique. Maybe they can increase their compositional skills and keep a close eye on creating more memorable parts. Tracks like "Vengeful Knights" or "Soldiers of Fortune" point in the right direction, but there is still a potential for improvement. On the other hand, I cannot identify any song that damages the flow of the album and all of them are meticulously forged. The passion of the band is tangible and its joy of playing constitutes an advantage which should not be underestimated.

One thing is for sure, Thrashist Regime have released a competitive sophomore full-length. They seem to be on a good way to the top of the global thrash scene and fans of Anthrax, Dr. Living Dead! or Exodus can have fun with their music. The homogeneous work covers the whole range from short outbursts to the blazing title track, an ecstatic instrumental. Find out your personal favorites. Regardless of your selection, you will be energized.