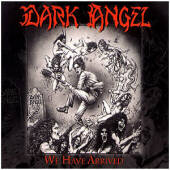 Type: Full-Length
Release Date: 1985
Label: Azra Records
Genre: Thrash
1 We Have Arrived
2 Merciless Death
3 Falling From The Sky
4 Welcome To The Slaughterhouse
5 No Tomorrow
6 Hell's On Its Knees
7 Vendetta
MetalBite on YouTube

My first contact with Dark Angel came about through their contribution to the sixth issue of Metal Massacre, the probably most influential and most ass-kicking metal sampler series of all times. "Welcome to the Slaughter House" was a kind of promise. My metal brother and I enjoyed its dynamic, merciless approach and we were sure that these ruffians would be able to release highly interesting albums. Time has told us that we were right. Especially "Darkness Descends" has stood the test of time, but the band's debut also still makes fun every now and then. Well, I have to warn the comparatively young freaks who are only familiar with the late outputs of Dark Angel. To be cautious about this, We Have Arrived has not much in common with the complex material of Time Does Not Heal. It delivers a rather primitive song-writing concept, but come on, "Show No Mercy" or "Kill 'em All" also did not score with academic compositions. These groundbreaking works have other qualities. However, let's keep the eye on Dark Angel's first longplayer.

The first sequence of the opening title track equals the intro of "Hell Awaits", but "We Have Arrived" appeared almost simultaneously. Therefore, this is rather a coincidence than an act of imitation. But as mentioned before, Dark Angel's seven tracks are less complicated than that of Slayer's eternal monument. They are clearly structured and can be inhaled easily. The less strong parts present run-of-the-mill thrash, the stronger sections live on their great riffs and a proper dose of velocity. The explosive "Merciless Death" presents some cutting guitars and an almost lacerating, catchy chorus. It has a lot of brutal charm, although its second version, released on "Darkness Descends" shows its superiority in view of the much better production. By contrast, the here reviewed full-length lacks pressure and force, but it comes along with natural, pure and belligerent. The stripped-down sound matches the clarity of great songs like the opener. "We Have Arrived" (the track) scores with straight lines and a menacing chorus. Well-dosed high-pitched screams of Don Doty make the picture complete.

Some tracks have fallen into oblivion and that's a pity, because pieces like "Falling from the Sky" still present solid, slightly naive thrash. Okay, the band has lent the air raid siren from Atlain (listen to "Sphinx" from "Living in the Dark", released in 1984) in order to start this song, but this alone does not mean that the acceptable tune can keep up with the remaining compositions of the vinyl's A side. The entire B side also does not hold jewels in abundance, even though the minimally melancholic frame of "No Tomorrow" captures my attention. "Hell's on Its Knees" gives full speed ahead, but it suffers from an overlong acoustic intro. Be that as it may, it underlines the ability of the protagonists to write memorable choruses and the part after the intro impresses with compactness. Dark Angel were most likely influenced by Slayer's debut, some Hanneman/King-like solos point in this direction, but their debut stood on its own feet. Admittedly, it left room for improvement, but regardless of this, I regret that they never reached the status of idols as well. Guess my metal brother shares this point of view.