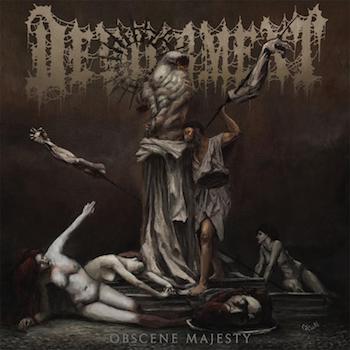 Before we begin, I want to preface by saying this isn't my first rodeo with this band. I'm familiar with them to a point and have listened to their albums before this. Devourment is a band I've been dying to have in my regular rotation for a few years now. I finally got the chance maybe a week ago after eyeballing this record at one of the record stores I like to frequent.

My very first exposure to brutal death metal/slam was Suffocation's debut (which I had to look up the title just now because I'm an idiot), but I wasn't tempered for what I was hearing and was turned off pretty quick. Much like with other artists in previous reviews I've done, I was too young and inexperienced to handle what I was listening to. Safe to say after being very much exposed to so much metal across the lands and having sated my appetite with all kinds of styles, I felt compelled to enter that once chimeric void as a more seasoned metalhead. The child was dead. The adult had risen.

Slam is not my favorite genre and Suffocation still hasn't moved me no matter how much I tried and tried, but other bands poked their heads past rounded corners to lure me in. Next thing I knew, bands like Pathology, Blasphemer, Antropofagus, Origin, and of course, the band in question, the mighty Devourment were in regular rotation in my library. Just like DSBM, this was a sub-genre I had to ease into slowly and carefully. I couldn't go in with no prior knowledge, otherwise I'd be crushed and buried alive.

On that note, I sure felt crushed and buried alive by this monstrous behemoth. I don't think I've heard guitars this down tuned in death metal before and sound this...crisp. Maybe 'crisp' isn't the right word. There's a definite muddiness to the guitars, but the clarity herein gives them a sharpness that cuts deep like a machete grinding the listener's flesh from the bone. These guitars sound absolutely ferocious, intensely cathartic, and unforgivably merciless. Imagine, for a moment, the artwork of 'Hammer Smashed Face'. Take that album and run it through a machine not having a clue what it actually sounds like. I imagine something like this album would lend itself to the listener's ear. The closest comparison I can give to a band that has guitars that sound this gruesome is Incantation, but their guitars are down tuned in a way that's different from this. While McEntee & Co. give the impression of being trapped in a dark sulfurous cavern in some otherworldly Hellscape, Devourment takes the listener through a sociopathic murder spree of virulent lethality and unstoppable brutality against every human who'd dare get in its path.

The drums also have the same effect. They lend themselves to quaking footsteps with every snare pop and cratered concrete with every cymbal crash. There’re also buildings collapsing, streets cracking open, lava spewing as the drummer starts picking up speed and intensity. I don't know what the bassist is doing because he's buried almost completely, but I'm going to assume he's there somewhere contributing. I guess what I'm saying is that the production is pure unadulterated savagery and represents the music perfectly. I can happily say it exceeded my expectations because I knew it was going to be uncharacteristically heavy, but I had no idea it was going to be this heavy!

I've been gushing about the production, let's talk about the actual songs. How are they? Pretty damn good! I really don't have much negative to report here. This is my first proper exposure to Devourment, so I can only work with this and the other album I'm familiar which is Molesting The Decapitated as far as comparisons go. Now in my opinion, the debut is superior, but this album is no slouch in terms of memorable songs. The riffs slay from the first song, 'A Virulent Strain Of Retaliation'. Immediately, there's no time wasted after the creepy ambient bit that opens before a truly disgusting set of riffs kick in, kicking the listener in the face, knocking all their teeth out before the drums kick in and offer a swift debilitating kick to the balls as a follow up. The only moment to catch a breather is the transitions from one track to the next. Even then, they barely last longer than a second before you're forced back to confront Rosas & Co. once again for another savage beatdown.

The chemistry between the band members is top notch as I remember from those old Devourment records. I hear it clearly in the razor-sharp planet caving riffs, the quaking guttural vocals, the violently brutal drums, and the rumbling bass. Very specific moments when they slow down and start to chug are some of my favorite moments like on 'Narcissistic Paraphilia' and 'Arterial Spray Patterns'. The latter has moments of brief technical riffing that gives some color to this album that's already sprayed with a color that's very familiar. The bass does tend to follow behind the guitars, as is often the case, but there are sometimes where the spotlight does shine on him, and he delivers some great parts. It's not often, but it's more than enough for me. 'Dysmorphic Autophagia' has maybe my favorite moment on the record where there's this tightly played infectious groove that sucks me in every time. It's fantastic. All the while the guitarist gives the listener some really great squealing guitar parts during it.

There's more I could go over, but I fear I'd just be repeating myself. Plus, I'm running out of steam. This album is tiring. Not in a bad way, though. I can't quite say this album is perfect, but I don't quite know what to say about it that's a real negative. Maybe there might be some parts that are standard for brutal death and slam veterans (I am neither). In that case, go ahead and defer to them for their thoughts. I'm still a newbie to this genre and, as a heads up, I probably won't review a lot of albums in the brutal death metal and slam categories. I'm just voicing my opinion, and, in my opinion, this album is on the strong end of 2019.