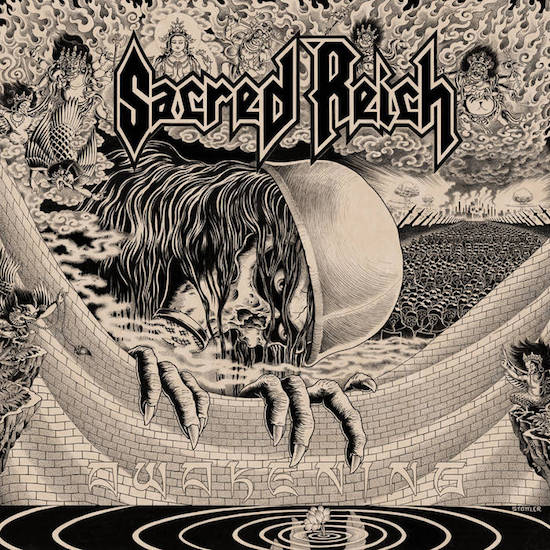 Sacred Reich are back? Cool - and the artwork looks like the picture they did not use for Ignorance! So, my expectations are clear. I will surely be blown away by another ignorant assault. Rind and Arnett go back to the roots. That’s okay, let's forget all these meandering albums that diluted their sound steadily. We are generous, not resentful and let those of us throw the first stone who are free from sin.

Now let the thrash metal feast begin. "Awakening", the track, kicks off the album with staccato sounds that invite a drilling lead guitar to give pretty harsh impulses. The sound, crystal clear and full of pressure, supports the composition in an excellent way. I decide to forget 30 flavors in a matter of seconds. Thrash metal is the only law, albeit this song does not belong to the wildest orgies of all times. Hordes of adolescent thrashers in South America who just have discovered the magic of "Pleasure to Kill" or "Obsessed by Cruelty" will call this track lame and useless, but come on, you know nothing, you snotty brats. It gets even better with the next track; Sacred Reich accelerate the tempo. They are playing almost fast now! I have to pause for a moment... ...the moment still lasts... ...here I am again. This is so goddamn heavy, fast and thrashy...

No, it's not. It's one of these NOTs that Scott Not Ian once showed on stage, more or less at that time when Sacred Reich still were a promising, rebellious combo. Must have been shortly after World War II. Awakening is no - and please underline no - thrash metal album, it's a thrash metal EP at best. A playtime of 31 minutes is ridiculous and a slap in the face. I wait for the comeback of a so-called legend after 31 years that offers a release which clocks in at 23 minutes. But that's not the only reason why I call this offering a thrash metal EP. The greater problem is that songs like "Salvation" pass by like a slightly harsher version of an ordinary rock song. Not to mention the jingling called "Death Valley". People who call this kind of music thrash metal are also of the opinion that it makes sense to demonstrate the misanthropic essence of black metal by an "Abrahadabra" listening session. Given these lukewarm, anti-aggressive stinkers, we can hardly speak of a thrash metal album, but of a thrash metal EP (at best, as mentioned above). This finding hurt. Thank God, the closer "Something to Believe" does not add flavour no. 32. But beware, this does not mean that you can expect a formidable thrasher. The number rather sounds like a jam session that has accidentally become a song...

...with pacifist lyrics. Phil Rind might be a clever guy, but his politically correct opinions are maybe mostly comprehensible, but always boring. He is the opposite of the young Sodomic, the Brazilian mastermind of Power from Hell who always wrote about raping women and comparable bullshit. (The hordes of adolescent thrashers in South America blame me for being a poser right now.) Well, in case of Sodomic's poetic art, I prefer the lyrics of Rind, nevertheless, they are less important than he thinks.

The album is not immune against self-quotation. The beginning of "Salvation" reminds me of the drum intro of "Crimes Against Humanity" and the first section of "Manifest Reality" revitalizes the spirit of "One Nation". By the way, this would be a really good track, but its chorus completely sucks. A sonic catastrophe without dynamic, melody or any aspects of tension. It's annoying to see that Rind's powerful vocal performance has its weakest moment exactly during this chorus, because there is actually not much to complain. So, what remains? "Killing Machine" and "Revolution" are great, the first one with an acceptable degree of Anthrax-harshness and a titanic chorus, the other one has, in alignment with its title, a tendency to punk, maybe it's their new "I Don't Know"? I don't know.

My personal problem is that I never was able to hate the band from the bottom of my heart, because its good songs are truly fantastic. I still love the title track of The American Way, albeit the album celebrates a triumph of predictable mediocrity. The same applies, for example, for "The Power of the Written Word" and "Heal". Anyhow, it seems as if Sacred Reich want to polarize, but this time they have gone a step too far, because they animate both aversion and affection in me. Thus, the result is neither black nor white, but an average rating. That's my respond to their strategy. And now I forget the bloodless songs of this album and celebrate a thrashing party with the remaining EP.