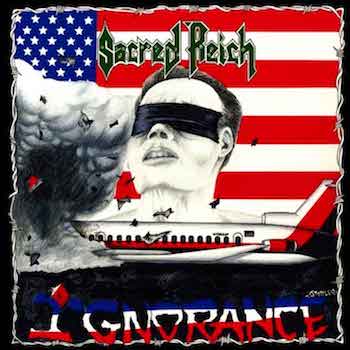 Sacred Reich started with a strong debut, but afterwards their career was going in the wrong direction. Instead of staying loyal to the thrash metal movement, mastermind Phil Rind had some bad ideas that resulted in completely lousy tracks ("31 Flavors") or greasy ballads ("I Never Said Goodbye"). Admittedly, there was a very dark time when no musician defended the values of the lively genre. Anyway, Rind seemed to be of the questionable opinion that he had to expand the horizon of his formation, no matter what it costs. It is therefore no surprise that the pristine first output holds the top position in the discography of the guys from Arizona.

Ignorance, produced by the legendary duo Bill Metoyer and Brian Slagel, shines with its powerful and differentiated sound. The opening guitars convey the feeling of a merciless force, although the riffing can simultaneously be described as casual and well-hung. The band presents a kind of guitar intro that is integrated in the unrelenting opener called "Death Squad". Sacred Reich do not unleash an apocalyptic inferno, although the picture on the reverse side of the album points in this direction. (They actually wanted to use an equally nightmarish image for the front cover, but it was replaced by the rather political collage. You can find the banned artwork on the inner sleeve of the vinyl edition.) Nevertheless, this opener is pure thrash metal, not too slow and not too fast, created with a keen sense for effective tempo changes. Further highlights of the A side are the excellently growing, very aggressive title track and "Victim of Demise". The latter scores especially with its chorus that achieves a remarkable level of pressure. By the way, Rind's bass guitar is well audible and delivers a special flair of heaviness. By contrast, the lugubrious "Layed to Rest" was just a more or less superfluous intermezzo.

Ignorance surprises with its mature compositions. The songs have no progressive structures, but they are more complex than, for example, the pretty simple title track of "The American Way". Rind was the main composer and there is no doubt that he had a fine instinct for both compelling riffs and smooth (yet powerful) song structures. All songs are easily consumable without being based on primitive patterns. Inter alia the eponymous band anthem demonstrates the song-writing skills of Rind. Of course, the group felt the need to show a politically correct attitude while delivering anti-Nazi lyrics. Honestly speaking, don't call your band "Sacred Reich" if you hate the National Socialists. It goes without saying that there are a lot of reason to condemn them, but don't expect an award for authenticity when acting under this provocative banner at the same time. Apart from this predicament, the song completes the highlights of the album. Yet it is a fact that the other tracks of the B side also do not fall short of expectations. Sacred Reich act ambitiously and confidently. Flattening riffs like that at the beginning of "Rest in Peace" prove them right.

It is still a pleasure to listen to this debut from time to time. It does not have the charm of imperfection like the first outputs of some other thrash bands that started their career in the mid-eighties. Its effect is based on the high level of professionalism of its creators. Sacred Reich worked with an incredible precision. Without lacking emotions, their songs seemed to be the results of a mechanized production process. But, of course, that's just a fallacy. The group was just playing very tight. Too bad that the band members never reached this top form again.

One hell of an album, in its contribution to the thrash metal community, much reflective to some early Slayer. Not necessarily in the vocal department, but musically. The executions of the compositions are that with precision. Bluntly put, they ripped it up on this one. Ignorance shines in every aspect, even though the production quality was such that the budget may've been not so much but enough to make a recording in the studio when thrash metal was hitting the community at a time where many of the great albums immersed, namely in the 80's and 90's. So much was pouring out and Sacred Reich was just emerging.

Being a debut album, this band emerged onto thrash scene in spectacle of that to which they were veterans, showing maturity at a time where thrash was just about 5+ years to which it was born. There is a differentiation between thrash that's by design and that by talent. Sacred Reich poured on the metal scene in around 1987 with good ideas musically. Their sound is that of their own, though they have their influences, which was stated. The music on Ignorance wasn't duplicated as in the sense of style and artistic value. They seem to tackle their sound quite readily with successful records to follow, or maybe not.

Their aggression is quite impacting on the ears and the lead guitar upholds accounts with which spells technicality. The rhythms are fast, yet the tempos fluctuate. Well executed lines here. Everything seemed to fit into place and the metal flows like water. They really sound original and scornful of their critics, but yet who doesn't especially when it comes to the metal scene? The music is what takes the listener to high levels and shows the world that they wanted to put out something to that which is uncompromising. I'd say out of the few Sacred Reich albums that I've heard, this one I cannot get sick of. Sure, the production wasn't the greatest, but this is a debut!

I'd say get the CD that was reissued in 2017 because the digital downloading doesn't feature this album. You get full immersion into the world of thrash metal perfection with a mere debut! Once you get the CD, you'll get a taste of what I'm talking about. It's really something that you can just press "repeat all" on your boombox or if you have it on vinyl just replay it. It's kind of like "whoa, what hit me?!" Genius debut never falling short of musical precision and originality. These guys tear it up in all respects. Just one listen and you'll know that I was right. Experience "aggression" in the strictest sense of the word, Own it, today!