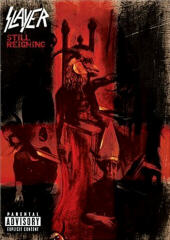 Why the hell would you need me to review this DVD? Isn’t over two decades of devastation, a firmly established classic status in the metal world and most importantly, the album focus of this release, Reign in Blood (undoubtedly one of the best and most influential metal albums ever), performed live in its entirety and with the original line-up not enough to pick this DVD? If not then I have nothing more to say to you, for the rest of us who already have it in our collections read the last two words of this review and move on with your lives.

Still Reigning is made up of three parts. The first section is the entire Reign in Blood release, their 28-minute benchmark album, played from start to finish and concluded by a theatrical downpour of blood during the closing track. I’ve listen to this album since 1986 and this piece still gave me chills. Amazing! Some might find a few signs of aging during the performance from our beloved quartet but over two decades of banging your head to this type of music who wouldn’t age? Don’t get me wrong here; this bunch still destroys punks 20 years younger with energy and dedication alone. Slayer by no means is just selling the performance; they relish every second of it.

The second part offers bonus material including live performances of Slayer classics such as "War Ensemble," "Hallowed Point," "Necrophiliac," "Mandatory Suicide," "Spill The Blood," and "South of Heaven.” The final section, a seventeen minute documentary called ‘Slayer in Their Own Words’ presents exclusive interviews with members of the band, their crew, fans and backstage footage. Even though this section is about past, present and future it focuses on Dave Lombardo's return to the fold and the performance of Reign in Blood, including the raining blood effect.

From technical standpoint the sound of the show is excellent and the only complaint I might have is the camera work that does not capture the full atmosphere of the show, but honestly until you see them live nothing will ever bring the excitement and full madness of their show onto the tape. If you’ve never seen this machine live do yourself a favor and jump into the pit, see if you’ll survive couple of tracks. Nothing, and I mean nothing, comes close to Slayer’s live shows and its atmosphere.

To sum it up in two words, because there’s no need to advertise this DVD any more: Metal Bible.