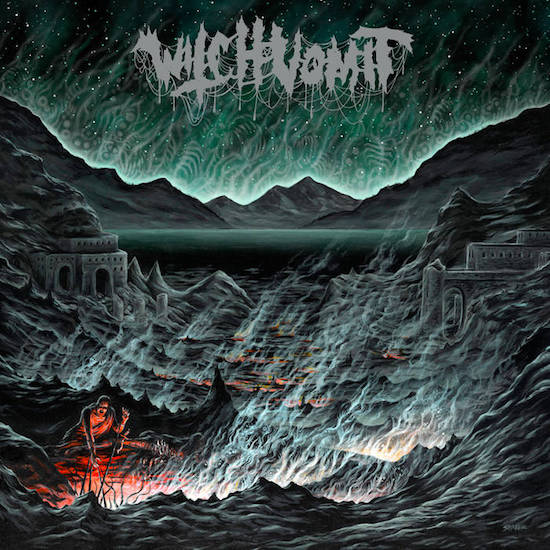 Witch Vomit have had major hype in the new trend of death metal throwback bands and for the most part it's rightfully deserved, however in the current death metal old school revival landscape with bands like Tomb Mold, Blood Incantation, etc. Witch Vomit's Buried Deep in a Bottomless Grave comes off solid, yet short all around.

First off the good side; this album is absolutely a death metal throwback album in all ways. If you’re a fan of either the Florida scene from the early 90’s or the Swedish scene from the late 80’s this album is for you. Witch Vomit offer a filthy and grueling display of pure death metal, gurgling death growls, distorted and treble heavy guitars punctuated by wailing solos and a frenzy drummer that’s borrows from the technical precision of band’s like Death and the sheer madness of golden age Cannibal Corpse. It all comes together in a great way, all the members of the band display their love and passion for the genre and it shows; overall this album feels and sounds like a classic Swedish death metal record but with the production and refinement of a classic Florida death metal album. It sounds great and it brims with the enthusiasm for this music, it’s basically a death album for death metalheads by death metalheads.

That being said and as some more insightful people than me expressed, we have reached the peak old school death metal revival. We’ve had so many amazing death metal bands in less than a decade from all over the world who have all released consistently good music that it’s almost like a buffet with nothing but delicious desserts and at some point you need a break and drink water and unfortunately for me, with Witch Vomit I’m burned out on so much solid death metal. I do recognize that this album is solid and Witch Vomit are in a good place to release even better music with their next albums but in present this album is simply too standard to really get excited.

Overall Witch Vomit are a worthy band to join the ranks of the crop of death metal revivalists but at the same time those ranks are overflowing, a good, solid album done with love and passion for the genre but not a modern masterpiece by any stretch of the imagination.