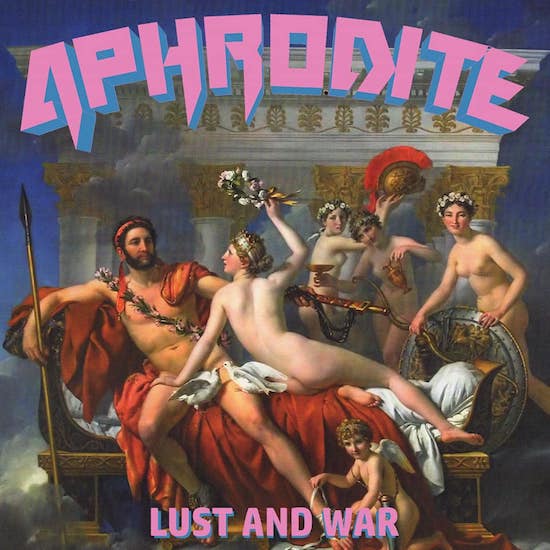 Hands down better than anything Tanza has made as a vocalist under the Demona and Outline banners; Aphrodite’s Lust and War is the definitive ‘dirty speed metal’ many aspire to make and have been wearing as a tag. Everything about Lust and War screams must have! Adhering guitar solos are there, the speed is there, and that raw arousing voice of Constanza Diaz is present. Lust and War is fundamentally speed metal with (nods to punk metal) at a particularly high level and comes as no surprise given the fact Jo Steel of Ice War took up the role of composing the music. Also contributing to Lust and War is Yan Turbo, who plays in a punk rock band by the name of Colorsfade. Hence the many references to punk metal can be heard throughout the release. This blend of personalities definitely played a role in the molding of Aphrodite’s sound. Lust and War signifies a new era in all of the members musical journey; the collective performances speak of a harmony achieved when blending these varying attributes.

No songs show hints of weakness making Lust and War one of the best speed metal records of 2019 standing within the golden aura of Chevalier and the likes of. It's almost unbelievable to hear that same aphroditic grown on a release that justifies Tanza’s voice; her presence makes Lust and War a special record. The instrumental work being mirrored on the songs have great coordinated structures that are memorable and possess tuneful catchiness. Igniting lust with the powerful opener ‘Hades in the Night’ and progressing to one of the best tracks on the record ‘Ares, God of War’, Aphrodite set themselves at a high standard, never slipping from the mountain of pleasures they stand on. Shouldering some formulaic elements of Outline, Ice War and Colorsfade, a wicked blend of gasoline is pumped into the tank of Aphrodite in-so establishing a sound the band can be identified by easily.

From the artwork to the music, Lust and War is full-packaged kick to the gut speed metal. With the guitars, vocals and drumming doing a fair share of weight lifting, a team effort feeling is created. All primary elements of speed metal are presented in a glorious fashion somewhat poking at the Greek era of divinity and grandeur. Further progressing to songs like the hard rock/heavy metal rebellion of ‘Penthaselia’, to the lightning strike of ‘Gorgon Medusa’ (which would make Lust and War incomplete without a song referencing the simultaneously beautiful and horrifying seed of Phorcys and Ceto), you hear the instrumentation make best of the time given storming with a chariot of solos and licks. The music as a whole displays ease and control, with the last 4 songs on Lust on War being the best offerings. The speeding kick of ‘Orpheus Charms the Gods of Death’, to the championed sounds of ‘The Odyssey’ and ‘Gladiators’, bring the record to a close on a very high note, thus encouraging the listener to partake in a repeated listening session. And upon giving the material another spin, it gets better as the tunes congeal in almost romantic fashion with the proposed theme on Lust and War. Don’t allow this speed metal affair to pass by untouched, what’s gifted here will be on the tongues of the scene for years to come.