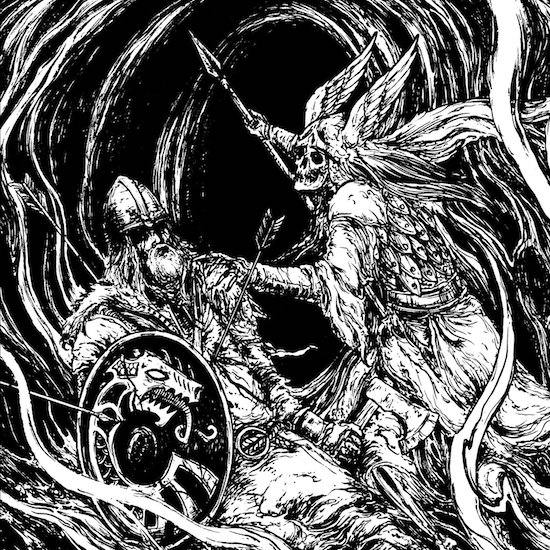 Runespell is a band I have often heard good things about but never took the time to listen to their material. I understand the project is Australian and was formed in 2017 as suggested by Metallum:The Metal Archives. Nightwolf being the mastermind behind has one demo and 2 full length records under the moniker, all of which were released in the short span of 1 year. Now in keeping with his tradition it seems, Runespell is set to put forth a 3rd full length casting which I have been given the fortune of hearing, and I must say that I'm not disappointed in the slightest. Voice of Opprobrium is not for those spoilt by the curse modernity has had on music and metal in particular but is for those that have with them the patience of the wise. There are many that will write this off but for me, I understand and appreciate what Runespell is trying to achieve, and to some point that is accomplished but I believe better can be done.

Patience is a component one would require for Voice of Opprobrium, given its opener is a 6-minute instrumental in the form of ‘Firmament in Blood’. At first I questioned the meaning behind this, but with the title track ‘Voice of Opprobrium’ I began to understand what it was Runespell had been gunning for all along. That feeling of antiquity, reason and purpose behind the music are but a few. Like the opening narration or theme music to a story, ‘Firmament in Blood’ laid the foundation of the enchantment due to follow. The same can be said about ‘Wraithwoods’ as it leads the listener into the glory of ‘All Thrones Perish II’. The thing is these interludes of sorts have a very purposeful tone to them in complementing the songs to follow. I find that the more I listen to the record, the more I can see the full image of what's presented extend and eventually engulf me.

Every instrument, every note played, sums up to be a key element of Voice of Opprobrium’s success. From the lo-fi drumming, to the keyboard synth, to the hawking vocals that is both melancholic and valiant, the listener is pulled closer into the aura encircling Voice of Opprobrium. The guitars are just as brill as the overtones on the keyboards in so matching the medieval thematic. For me the drumming and the sound of the snare is what I appreciate the most about Voice of Opprobrium; it has a sonic comparison to that of knocking on a tribal percussion made from hollowed-out timber, and in turn gives the music a relaxed, humble, transcendental and meditative milieu.

This music is great, it brings me back to a time when finding metal was difficult and the process of acquiring something longed-for was toiling. However, when I did manage to get the music in whatever quantities available, it felt like a true achievement, when the first notes began to play, the wounds of the burden faded away in convalescence for the next hunt. That toiling yet rewarding patience I speak of is here throughout the journey of the record but gratifies the seeker gloriously; your chalice runneth over with sweet sounds of enchantment, battle, despair and ethereal ascension. What began as merely a listening session evolved into a magical experience to say the least. Voice of Opprobrium is one of those records which only those who know what it means to 'work for your music' would understand. This was not created for the mere peasant; rather for the one that has endured the scars in quest for whatever had been coveted and sought out.

I understand opprobrium refers to "something that brings disgrace", and such is perhaps expressed lyrically; but after listening to this marvel pleasure is what Voice of Opprobrium has brought. After hearing this I've concluded that I need to own all of Runespell's music on vinyl.