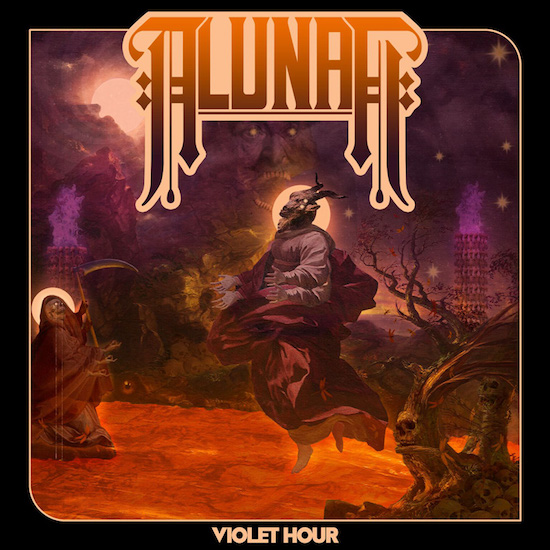 When the psychedelic dance of rhythms shakes to the beat of doom metal, all that was lost to the core of darkness is enlivened through a chimera of colors. Alunah, with their 5th enchantment titled Violet Hour, paralyzes the stone-head down a path of hallucinations both morbid and blissful, tantalizing the senses until pushed beyond the border of sanity. When these two lovers meet, the strangest of sights are seen, galaxies crack open the shell veiling their secrets and within that hour, phantom figures soar and reach out for you under the ebbing sky. Though whomever experiences these illusions may awaken to reality, what was seen remains a reflection of a being’s most innate thoughts, settings subconsciously crafted depending on the energy of the moment.

Summoned by the call of Siân’s grace aiding the drift into a space of thoughts; ineluctable the grasp of her euphonic vocals, greeting the listener immediately over the rocking melodies of ‘Trapped and Bound’, fetching any participant drifting within the watery flow expelled by ‘Dance of Deceit’ eventually leading to the queen’s paradise of peril ‘Hunt’ cultivates so effortlessly. This dance of beauty and horror synchronized by the hypnotism guitarist Dean uses through his delectable leads and gripping solo work comes to no end it seems, like the mending of an image or scripting of Swedish runes, an everlasting journal of intimacy and detail. Jake taps away in trance to the swing of Dan’s groovy bass-lines and the sea-saw of Siân’s vocals making Violet Hour a spiritual anointment under the luminescence of dimming candles.

Like a complete story Violet Hour connects all ends of these 8 tracks bringing the music full circle, as is infinity. Alunah’s grasp on the genre cannot go without praise; their bluesy rock and stoner doom schematic works like a maze, once you have set foot into their field it grows harder trying to find a way out of the hypnotic sounds and visions, and why would you want to. You’re already spellbound venturing deeper into songs like ‘Hunt’, ‘Violet Hour’ and ‘Unholy Disease’; once having stepped so far out into the space its likely a second spin results. I’ve lost count how many times Violet Hour has been played in its entirety, and to think of it, the record was only spun as a result of being inquisitive. These tunes are so relaxing you may find yourself fading into sleep; blame the guitars, bass, drumming, vocals, the bluesy overtones or the simplicity of the melodies, the fact remains Alunah has the genre under its spell. In comparison, you get the feeling many bands are trying too hard and barely able to do much; meanwhile, Alunah plays with an effective ease I've only ever heard a handful of doom metal acts the likes of Windhand achieve.

The dreamy atmosphere of Violet Hour is but one element that keeps you hooked, much of it could be credited to the tempos Alunah uses and how the instrumentation supports them. I could go on about how soothing the music here is but to truly understand you would need to hear it for yourself. Promotional tracks were released for ‘Trapped and Bound’ and ‘Hunt'; if hose is not enough to get any doom metal supporter’s attention then I don’t know what more to say. To be released through Heavy Psych Sounds, October 11th 2019, Violet Hour is trance music for the soul.