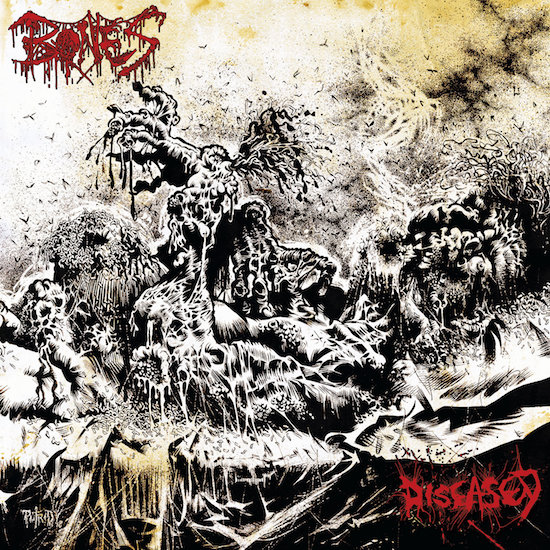 Bones, a band formed and based in the United States of America, carve deeper their signature within the cold surface of Chicago's death metal underbelly. With Diseased being the band's 3rd release, they strive to expand their influence and reach within the underground. Bones on Diseased play a blend of styles that to me, can either prove successful or hazardous to the final output, if not managed correctly. Thus, this glassy form of avant-garde death metal tries to push the bar and boundaries of the genre, which is fine; however, doing such often comes with consequences. The music here is being morphed with different genres in a conspicuous fashion; I say that because the obvious inclusions are presented obtrusively. There’s black metal, sludge metal, death/doom, thrash, crust punk and hardcore. In opposition to hinting, Bones delivers a bare-faced thrust-to-the-gut approach by giving the respected genres abundant spotlight. The risk here is the music can easily divert from pleasure to displeasure, due to so many styles being meshed without warning. On Diseased it’s a bit of both; mixing the genres proved to be enjoyable, but only for so long, as the formula to Bones’ chasm of uncertainty left the death metal aspect a bit underwhelming. The record still stands as a decent unconventional take on the genre but loses adhesion towards the end.

The first indication Diseased was going to be a worthwhile record, occurred on the opening track, 'Blood, Diarrhea and Tears'. Easily the best entry on the record due to its high efficacy of combining black metal with death metal and crust; and with the aid of some melody, the song showed a fluency in transitions. I was bidding Diseased would be offering more of that, and it did with ‘Mass Graves’ through ‘Stench of the Deceased’ that answered the request with considerably more confidence. However, the strong foundation built by the aforementioned began to erode rapidly, as the composition structures and components used in the development of the material on Diseased crumbled. Like a ball of sand being folded in the palm of a hand, at first, seemingly firm, but begins to gradually lose texture and eventually decompose as the primary components are compromised by natural atmospheric forces and pressure of the squeeze.

This crumble began with ‘No One Matters’ that tried to move too quickly in fitting multiple styles into a track that was barely over 2 minutes. By doing this, it appeared irredeemably messy; not only ruining the actual death/crust metal, but the other elements forced into the mix. ‘Down’ would try to resuscitate the weakening body of Diseased to which it did do to an extent but would suffer from problems of its own towards the closing moments through a minute of seemingly disorientated filler. ‘Boozer’ appeared to be a blur of random noises which also plagued ‘Crucifer’ despite its commendable hint at early Celtic Frost.

'The Future is Now' would try to reclaim some of that glory presented on the 1st half of Diseased by revisiting and successfully implementing the more favorable qualities of that period. But again, it would leave an impression of hastiness on the listener, as though scurrying to cover blemishes while putting the finishing touches on an item. Despite being a good record, Diseased produced a sonic friction which resulted from destructive and convalescent forces pushing against each other and would eventually go on to define the album in its final state. I enjoyed the record but wished there had been better music to sustain the momentum built. Diseased will still be a great album to many; I may partially agree; however, the flaws are too noticeable to be ignored. Flawed, but still a good record.