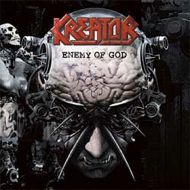 Okay, I apologize. I just wanted to be effective. Once in a lifetime! Anyway, let’s take a closer look at Enemy of God. Lyrics are of course not the most important thing on an album, but since Mille likes to mime the intellectual, I have to get it over with quickly here. The lyrics suck. They are full of striking third-grade slogans. The multiple repetition of "I want to kill you" seems ridiculous and lines like "I hate your lives" or "All I see is terror, all I see is pain" are no better. But let's not rob Mille of his dreams of 'Murder Fantasies', 'World Anarchy' or 'Impossible Brutality' and rather devote ourselves to the music.

As said before, Enemy of God is a good album. Honestly speaking, it does not have many thrash metal vibes. Kreator have penned some pretty smooth compositions that are heavy, profound and muscular, but the spirit of thrash only shows up every now and then. This is rather modern heavy metal in pure form and some hidden Maiden-esque melody lines are not forbidden ('Voices of the Dead'). Of course, sometimes Kreator steps on the gas pedal with the effect that the songs have an authoritarian touch. Nevertheless, everything seems to be well planned and spontaneity comes off badly. This is tolerable, however, because many titles have other qualities. The cool chorus of 'Impossible Brutality' catches the ear quickly, every note is right in the opening, pleasantly aggressive title track and one also likes to return to 'When Death Takes Its Dominion' with its excellent solo, its effective opening riff and its dark mood.

Kreator succeed in playing their strongest card in the 21st century. They find a good mixture between hardness and melody. You could maliciously call it consensus metal, but you can also simply acknowledge a certain compositional class. Most of the pieces have a remarkable flow, are relatively varied in conception and suffer neither from over-length nor from insubstantiality. This alone is laudable, but the best is yet to come. Many songs are simply fun, for example 'Dystopia', which unfolds its full splendour in the chorus. The experienced production, which reveals no weaknesses, also contributes to the positive impact of the songs. Enemy of God suggests that Mille, Ventor and friends were able to realise their idea of the "right" sound exactly.

Maybe it is right that Kreator did not leave their comfort zone on Enemy of God. One can blame them for this, but everyone who sits in a glass house shouldn't throw stones. Apart from this, the lack of progress does not matter. The overall impression is: good.

This vintage German thrash metal band was originally founded under the name of "Tormentor", which they used for a few years before changing it to "Kreator" in 1984. Two original members are left, Miland "Mille" Petrozza on vocals/guitar and Jurgen "Ventor" Reil on drums. The newest members are Sami Yli-Sirnio on guitars and Christian "Speesy" Giesler on bass guitar. Their best lineup, however, would be the one that transpired during the Coma of Souls era. This is the eleventh full-length release for the band, which includes some of their greatest studio work since Violent Revolution. Aside from Coma of Souls, Kreator of the 1990's didn't strike me as much as their more recent releases. They switched back to focusing more on their older thrash metal roots. This is where the band shines the most. When they abdicated from their older and more aggressive approach, I lost interest.

Enemy of God features total melodic thrash metal guitar work that sticks with the listener in an utter and total amazement. In terms of analyzing the entire album, it has its peaks and valleys in their guitar executions. Some tracks are more memorable than others. This release is monumental for many reasons. The music features heavily tremolo picked guitar melodies, gallops and bar chords. There are some songs that feature acoustic guitar parts and spoken words, but not in its entirety. The release primarily deals with fierce written thrash metal riffs, raging tempo changes, clean guitar parts and total originality to its musical writing. This newer band's approach has taken an energy-laden action by going back to their aggressive thrash metal writings.

The variety of this album is heavily orchestrated thanks to frontman "Mille" Petrozza. All of the songs captivate the listener, especially during the bridge and chorus parts and, most notably, during the title-track and "Murder Fantasies." The latter track includes Michael Amott, who exhibits a short, whammy bar lead guitar part. Thrash metal doesn't get executed much better! Its well-produced and recorded instruments are well mixed together. You can hear every guitar riff, guitar lead, bass guitar and drum work with an utmost clarity to it. As for the overall playing, the only thing that were not very effective were the guitar solos. That is my most critical statement of this released by Kreator. There was just no real innovation in this aspect.

The lyrical concepts focused mainly on death, religion, politics, war and terrorists. Some of the most intelligent words that I've heard from a band in this category. The lyrics mesh well with the guitar parts. Aside from the brilliant guitar work, the lyrics are a close second. The album doesn't feature any cover songs or live tracks. It's just under 60 minutes of ingenious thrash metal. In summation, thrash metal doesn't get comprised better than in this phenomenal album. With so much originality and variety, Kreator belts out one of their best works out of their entire discography. As was previously mentioned. the lead guitar parts to each song are nothing spectacular. However, the melodic guitar riffs and lyrics are the highlights. If you're still skeptical, be sure to check out the title-track and "Impossible Brutality" first.

In recent recordings, groups such as Dark Tranquillity, Strapping Young Lad, Enslaved and Grave have combined the best of aspects of their earlier music together with modern-day production and sound. This renaissance will continue throughout the year, as new releases from In Flames and Cryptopsy are on the horizon. The end result is a new style of music which pleases fans of both old and new material.

Kreator’s latest effort, Enemy of God, is at the center of this new movement. Their music combines elements of all eleven of the band’s previous releases. Songs such as, “World Anarchy” and “Murder Fantasies” pay homage not only to their early sound, but also to the German thrash movement – a scene Kreator helped form twenty years ago.

Enemy of God gives the listener a taste of the unique sound Kreator perfected on their last record, Violent Revolution. While songs such as the title track and “Dying Race Apocalypse” have very groovy parts to them, Kreator maintains the traditional heaviness only they can pull off. Mille Petrozza’s vocals have come a long way since Violent Revolution. Petrozza’s effective experiments with vocal harmonies in the song, “Voices of the Dead” are complimented by the complex guitar and clean drum work of Jürgen "Ventor" Reil. Enemy of God is almost a microcosm of the renaissance we are seeing in 2005.

If you are a fan of thrash metal, or heavy metal in general, you need to invest in this record. In twenty years we will be proudly cradling our beer bellies, trying to imagine what thrash was like before Enemy of God.