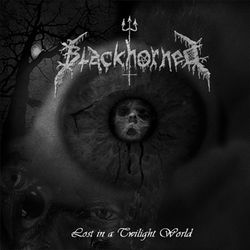 Blackhorned from Denmark have released a couple of albums that contain a well executed mix of fairly extreme metal. Its main ingredients consist of medium-fast black metal, atmospheric or even epic and melancholic sequences and an extra slice of thrash metal. The throaty, gargling voice intensifies the dark aura. Therefore, I think that Blackhorned feels comfortable when being classified as a (more or less) typical black metal band. Well, the term "band" should be used with care. Lone wolf Atziluth has created the here described album on its own. He wrote the songs, played all instruments and recorded, produced, mixed and mastered the album. Only the lyrics of eight tracks are based on the poems of a person called Stine Hoppe. However, in view of the convincing result, Atziluth seems to be a real allrounder. It is worthwhile to take a deeper look at "Lost in a Twilight World".

Let me pick out two songs in order to describe the musical range of the record. "Embraced by Shrouds" demonstrates the craggy side of Blackhorned. It´s a fast-paced, powerful thrasher, embedded in a deep black atmosphere. The guitar delivers sharp riffs as well as short melodic parts that do not lack of pressure. If you need something that helps you to lose aggression, this song may be the right choice. The opener "Floating Darkness" tends towards an other direction. This mid-tempo number is dominated by a dreamy yet scary atmosphere. Thrash metal elements do not show up, while keyboards emphasize the somewhat unreal aura of the song. So it turns out an opener for quiet connoisseurs; but to listen to this tune is surely not an appropriate way to reduce aggressions.

Atziluth provides a varied program. Despite of that, it does not happen often that he varies the tempo within the songs. All of them follow a straight path from beginning to end. Nevertheless, the album never gets boring, because the guitar work is just brilliant. On the one hand, it is aggressive, razor-sharp and edgy. On the other hand, it is melancholic, emotional and widely sweeping. It´s always depending on what the individual composition needs. The result shows that Atziluth seems to be able to express his feelings musically in a very good manner. And what´s more, he proves that he has understood and internalized the black quintessence of the here presented metal subgenre.

The lyrics deal with the usual topics. Some of them underline perfectly the effect of the music ("You will see the feeling of pain / As you wander / Through the woods of twilight"), but sometimes they are naive at best while delivering sick violent fantasies ("To cut out your tongue / In one sharp cut"). If there is nothing else to say, he should have written an instrumental piece. However, I do not care about this kind of shabby poetry as long as the music enthralls me. This is the case - with the exception of the last tune. Due to its ponderousness, it is too long for an outro and too lame for a regular track. But I can live with that minor flaw, because on an overall basis, this album scores with its bombastic song material as well as with its dark and dense sound. (Nevertheless, you do not need to appreciate the green vinyl of the limited edition. It´s really very green!) If you like to listen to bands such as Vargsang, you will also enjoy the comparable sound of Blackhorned.