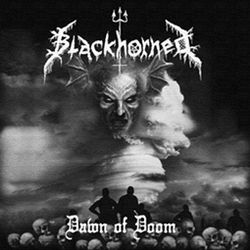 The name Blackhorned stands for generic black metal, for songs, which are neither primitive nor complex and for an uncompromising underground attitude. The corpse-painted one-man-army Atziluth sends regards to the other side ("R.I.P. Jon Nödtveidt! Hail Dissection!"), but his musical approach has not much in common with that of the dubious misanthrope that committed suicide in 2006. Dawn of Doom is rawer, straighter and less innovative than the classic albums of Dissection. Droning guitars welcome the listener after the intro and they alone give the album a brutal and unfortunately also a pretty noisy touch. Moreover, they ensure a very dark atmosphere. It makes sense that the booklet and the artwork stick to the typical black-white-aesthetics, because Atziluth does not intend to break out of the tried and tested schemes of the sub-genre, neither musically nor optically. Well, a clear position can always be helpful.

The lone wolf hails from Denmark and while listening to Dawn of Doom, it becomes more or less obvious that Blackhorned do not originate from Norway or Sweden. The typical icy lines from the land of the fjords are missing and the famous Swedish instinct for a good combination of gloomy melodies and rapid rhythms is absent, too. Blackhorned rather integrate thrashing elements into their sound without being a typical black thrash combo like Aura Noir or Nekromantheon, because the Danish artist does not create this filthy and shabby foundation that builds the backbone of the aforementioned combos. Instead, the black aura always keeps the upper hand.

Dawn of Doom does not hold outstanding riffs, choruses or anything else in abundance, but hard criticism would be inappropriate, too. Somewhat problematic is that the songs do not really stick in my mind. Apart from this, they rely on a good substance and some of them distinguish themselves by pretty strong details. "A Growing Darkness" belongs to these songs, because it fascinates with a smooth flow that connects the verses with the chorus perfectly. Another example is "Mankind Reduced to Ashes". It embodies pain and torment while combining a dragging beginning with an infernal second part. Thus, its configuration shows the whole program of Blackhorned in just one single track. On the other hand, the closer sounds like a Celtic Frost inspired lament, but honestly speaking, it is too long and uneventful.

The gruff lead vocals stand shoulder to shoulder with the sometimes melancholic, mostly aggressive guitar work. Atziluth does not score with a very variable voice, but black metal itself is no variable style (as long as we do not accept the perverting confusions of some bands as black metal). Therefore, I am totally fine with his style of singing and the more I listen to this work, the more it reminds me of Vargsang, a German force which is also mainly run by a lone warrior. Sometimes I think that these multi-talents should form a real band in order to increase the level of their song-writing skills, the technical competence and the musical variety. But at the end of the day, it does not matter. Dawn of Doom marks a good album, not spectacular but pretty solid and entertaining.