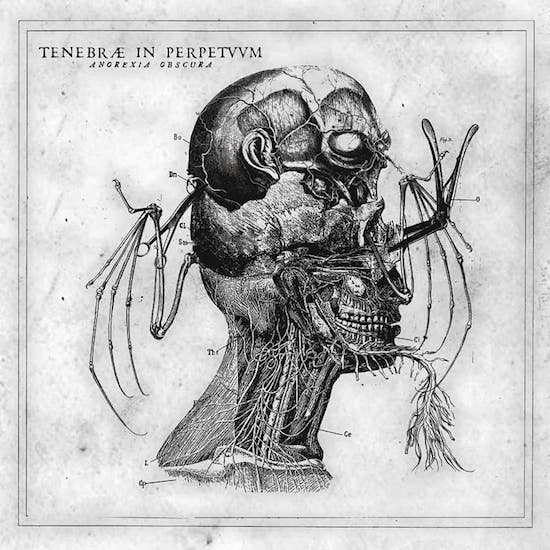 Despite the ambitions of the respective musicians, some albums turn out to be a real challenge for the reviewer. They are mostly characterized by a weak production, an awry opener and a pretty opulent playtime. The fourth long player of Tenebrae in Perpetuum clocks in after 40 minutes and this seems to a customary length, but I guess this have been the longest 40 minutes of my life. The band proclaims that it plays black metal, but it would be the same if I say this review is written in Mandarin. This would be a lie, right? So, let’s come to the facts.

I hate the production. The drums are absolutely powerless during the more or less rapid sections. They appear as a bothersome insect. It flies around your head and it is annoying, but you cannot catch (stop) it. The guitar tone would fit a left-winged punk manifest with intellectual aspiration, somehow sick and revolutionary, but it fails in the context of the blackest metal genre. Strange keyboard sound effects also want to emphasize the individuality of the Italian duo. Guess it’s needless to say that they also lead the black metal supporters astray. But maybe we can neglect the defects of the mix in view of convincing songs?

Sorry, we can’t. This extrovert, unorthodox and eccentric material makes it impossible to enjoy the album. Perhaps I have an affinity for conventions, or I am just too narrow-minded, but this is not the kind of black metal I want to hear. All these electronic gimmicks (to name but one example, listen to the monotonous keyboard during the sixth track) stifle any form of black metal emotions, the evil yet whiny voice cannot make up for this. The badly produced guitars deliver fatalistic riffs – and they are average at best. If the band had the aim to express agony through music, the I must say: congratulations, the experiment has been successful. But as much as I regret it, I could live pretty well without this kind of pain. Okay, rarely it happens that the guitars deliver a more or less impulsive element, but that’s definitely not enough in order to impress the more and more bad-tempered listener.

In a nutshell, I do not understand the intention, the approach and the result of Tenebrae in Perpetuum. From my point of view, it is one of the most senseless albums I have heard in the last twelve months. Honestly, which kind of shit did these dudes smoke since the last full-length in 2009? Ten years of creative nothingness make us fear the worst. Either way, maybe the artists will find their target group, but excuse me, I am not part of this elitist circle. And now I need “Hell Awaits”, “Transylvanian Hunger” or “Iron Will of Power”. Urgently.