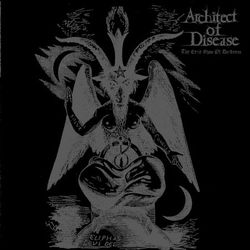 I had never heard of Architect of Disease until somebody sent me the file of this album. Okay, black metal is the second-best style in my personal sub-genre ranking. That's why I am familiar with this type of metal. With that said, I was of the opinion it would be no problem for me to write a review. However, it was much more difficult than I thought. To avoid misunderstandings right from the beginning, it was not problematic because of the material's quality. Architect of Disease, this becomes quickly obvious, do not lack passion, conviction and ambition. However, maybe it is exactly because of their ambitions that their approach sounds pretty extraordinary. Typical genre bands like Immortal, Marduk or Dark Funeral are great, but their songs can be inhaled easily, at least to a certain degree. Contrariwise, the members of Architect of Disease challenge the listener and sometimes it is not easy to follow them through the jungle of their compositions. So let's try to decode them step by step.

The songs do not suffer from incoherent patterns, by far not. But their bulky riffs and the somewhat progressive melody lines and sounds were obviously not created in order to ensure a smooth flow. Catchy parts like the beginning of "Illumination of Abyss" remain rare and due to whatever reason, in particular the opener is not easily accessible. Expressed differently, the songs are not predictable, and this fact forces me to stay curious during the entire album. Sometimes the compositions sound drug-imbued, a certain industrial touch also shows up from time to time. The pieces do not possess typical industrial elements, but the vigorous, gruesome and more or less unconventional voice does not sound like a black metal monster, but like an angry deus ex machina. By the way, this is probably one of the reasons why this album spreads some death metal vibes. I am not the greatest fan of this style, but Architect of Disease are competent enough to mix these sub genres cleverly. Finally, from time to time the dominating mid-paced tempo makes me think of rather slow-moving doom acts like Count Raven after having gone through storms of steel.

Some songs grow with every new listening session. The guitar lines of "Cycle of Change", for example, reveal step by step a certain kinship with some typical Melechesh eruptions and that is, of course, a good thing. Yet there are also heavyweight monstrosities like "Eerie Glow" that are charming and somewhat abstruse at the same time. 30 years ago, I would have listened to such tracks a thousand times, but today I do not have the necessary luxury amount of leisure time to do so. Either way, most tracks reach a more than stable level, only "Everlasting Torment" lives up to its name involuntarily. But this does not affect the overall picture significantly. The Eerie Glow of Darkness is a well-produced album with a very resilient production - beware of the pumping bass - and compositions that do not lack substance and individuality. More open-minded freaks than me can add some percentage points.