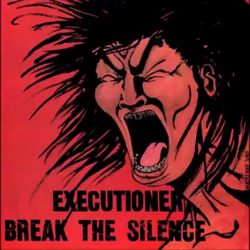 Type: Full-Length
Release Date: 1987
Label: New Renaissance Records
Genre: Thrash
1 Death March
2 Break The Silence
3 Eye Of The Needle
4 Your Life Is Over
5 Terminally Ill
6 Hatred
7 Genocide
8 No One Left To Die
9 Victims Of Evil
10 Stand Up And Fight
MetalBite on YouTube

Sometimes I think that everything was better in the old days, but this is nostalgic nonsense. Even the golden eighties were full of catastrophes. Chernobyl, the Tiananmen Square massacre in China, earthquakes in Iran... the list is endless - and some cynics say that the list is not complete without the release of Break the Silence. Quite frankly, I agree.

Executioner's vinyl is the grotesque caricature of a metal album. The song-writing is as terrible as a plane crash. The production sounds thin, atypically holey and miserable. I do not know the motivation behind the recordings, but I am almost sure the "musicians" wanted to make an attempt on the global metal scene. They tried to poison our tastes with this meaningless, uninspired and totally useless track. I do not intend to destroy the reputation of my most favourite sub-genre, that's the reason why I do not write every letter of the word thr**h. It would be terrible to read such a fantastic word in a review for this pile of shit, because there exists absolutely no link between the here presented songs and the classics you are thinking about when it comes to thr**h. However, Executioner wanted to be a thr**h band, but they were just crummy wannabes. Usually, dudes of this kind do not even get the permission to be part of the road crew. Here are the painful details.

The choruses are absolute crap. No tinge of a melody, no memorable lines, nothing. I admit that "Your Life Is Over" sounds a little bit better than the other flops, but even this track does not reach a fairly good level. Okay, I further admit that the solos are really solos. What I mean is that they have nothing to do with the rest of the so-called songs. They are performed without any connections to the other parts. However, the worst is yet to come. Sometimes the "artists" want to show that they can play really fast. That's the point where the drummer decides to torture his snare drum as much as he can. It's that kind of velocity which is performed only for the sake of velocity. By the way, the rattling snare is one reason why the mix sucks. The guitars also fail, they are neither heavy nor massive. Believe me, it's a drama and the totally expressionless vocals do not add any value to the songs as well. But the main problem, no doubt about it, are the songs themselves. They are performed without any emotions, they do not possess any kind of surprising twists and turns and to call them simple is almost a euphemism. The meticulous design of the fabulous artwork reflects the accurate elaboration of the ten anti-songs. I never worshipped the God of complexity, but rather straight tunes need at least a good main riff. Too bad that Executioner ignore this iron law completely.

With publications like this one, New Renaissance Records demonstrated impressively that they were interested in committing commercial suicide. Crude gangs like Executioner deserved a kick in the ass, a glass of warm milk or some private lessons, but there is one thing that they broke the silence for the last time. It remained their farewell album. Hey dudes, do me a favor and did not deserve: a record deal. Therefore, it comes as no surprise that Break the Silence do not come back. No renaissance instead of New Renaissance. We do not want to face the next catastrophe.