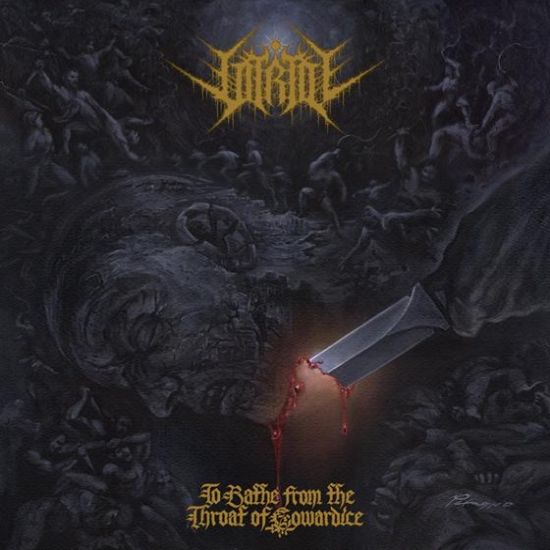 This band’s got an interesting trajectory - they were basically known as Those Who Lie Beneath in a previous incarnation and had the hilarious distinction of being signed to a Christian label, Rise Reocrds, and I remember seeing one of their members wearing an Immolation shirt in a music video. Something tells me they don't vet the beliefs of band members too thoroughly. Either way, you could definitely tell that they had chops back then - there were just way too many gravity blasts going on in that band for them to be considered an official part of the Christian metalcore family.

There was a bit too much of a swoopy-haired aesthetic with their previous version of the band, however, and I think they've just acknowledged that and decided to reinvent themselves. To Bathe from the Throat of Cowardice is a menacing angry as fuck death metal album that doesn't know what the term "melody" means, instead choosing to create entire songs out of Hate Eternal-style spastic nonriffs in a way that Hate Eternal themselves couldn't even pull off. This is...tense. I know I use that adjective a lot in reviews, but it's more evident on To Bathe from the Throat of Cowardice than any other album I've heard. The drummer seems to negate all sense of groove, playing constant double-bass in a mechanical, hyper fast sort of way that clearly shows the guys has ability, but just want to make absolute sure you don't remember any of the riffs, or can barely even make them out - I don't think I've ever heard a drum performance that I could describe as "suffocating", but there you have it. The music in general gives you very little time to breathe - when they're not smashing you into smithereens with a rapid, dissonant strum over a hyper fast double-kick, they're probably just hanging on a really nasty chord and letting you hang there, like a rollercoaster that pauses for juuuust a couple seconds before the big drop. The vocals are the greatest holdover from the band's deathcore days, being the type of throaty roar that you hear more commonly in that style, but the humanity in his anger gives this a bit more of an accessible edge, where with a vocal performance that tried to wander off and do more things, you'd risk losing me with music that's already this linear and all over the place.

I can't say whether or not I enjoy the pulverizing experience that To Bathe from the Throat of Cowardice offers while it's on, but I can say that this is an album that 100% nailed the atmosphere it was going for. This is a terrifying, harrowing album that throws as much chaos as it possibly can at you and dares you to listen to it all the way through. Do I vibe out to this or headbang or anything like that? No, not really. Am I thoroughly engaged and paying attention to the music the entire time? Absolutely - the music is meant to completely take over your senses until you can't tolerate it anymore, while maybe baiting you in with a little bit of foreboding dread. It's a perfect album, but it may not be the perfect album for me. I can still definitely appreciate this for what it is, though, and check it out if you're a fan of death metal that's excessively dissonant and overstimulating - any of you out there?