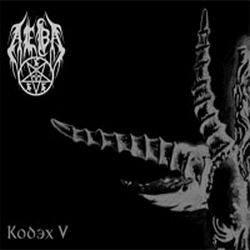 Aeba do not exist anymore and this is a pity, because they were competent and did not lack integrity. Of course, the scene is big enough to get over such a loss, nevertheless, the horde from Kiel was a trustworthy supplier of German black metal. They did not present extraordinary details or experimental ingredients, but they were able to use the tool box of the sub-genre in an intelligent manner. There are just some minor flaws. They concern the album's sound.

It's safe to say that Kodex V does not profit from an excellent production. The bass is more or less non-existent. The massive guitars do not leave much room for the drums as well, while the vocals are able to leave their mark. They are almost overloaded with effects (reverb, distortion), but lead vocalist Isegrim performs well. Moreover, the other musicians also show no weaknesses - only the bass player cannot be assessed, due to the aforementioned reason.

The song-writing does not lack complexity. Aeba love to integrate breaks and the big number of tempo changes challenges the listener. But it is also true that the band has designed the songs cleverly. The different tempos increase both the dynamic and the intensity of the material. The same applies for totally unleashed solos like that at the end of "Lifecode Sin". Aeba do not dish up fast food black metal, but the songs always remain comprehensible and this is mostly an interesting combination.

Less interesting is "La Petite Morte", a pretty meaningless instrumental that divides the nine regular tracks into two halves. In view of the opulent playtime (66:06 minutes, nice joke), there was no necessity to put this comparatively mild number on the album. Be that as it may, there are still a lot of great pieces. "Geist der Dekadenz", partly equipped with German lyrics, has a very malicious beginning, furious blast beats and extremely massive sequences as well. Aeba demonstrate nearly perfectly how to create a black metal monster which is getting more and more vehement. (By the way, Dekadenz is much better than Dekabank, but that's another story.) "Seven Souls" is another climax. After a shady intro with whispered vocals, the song explodes. Hyper-fast drums motivate the guitars to brutal lines, the impure vocals impress and total blackness reigns. Even the fact that the apostles of the other side have also integrated some pretty melodic sequences does not take strength from this killer. Finally, the anti-Christian "The God Below Us" with its flattening guitars makes the unholy trinity of highlights complete. Very heavy mid-tempo parts with spoken vocals lead into devastating, pretty rapid sections with very good guitar lines. In their best moments, the guitarists create fathomless depths, but they also master morbid, less violent sections, as demonstrated by the break at 4:50 minutes.

What's left to say? You guessed it, I recommend this work to everybody who thinks that formations like Grabak or Svartsyn do a good job. Admittedly, more than 66 minutes form a real beast and it takes time to become familiar with Kodex V, but it is worth it. I have described the highlights, but more or less each and every song comes into its own. Therefore, here is my message to five dudes in Kiel: comebacks are sometimes dubious, but they are not forbidden.