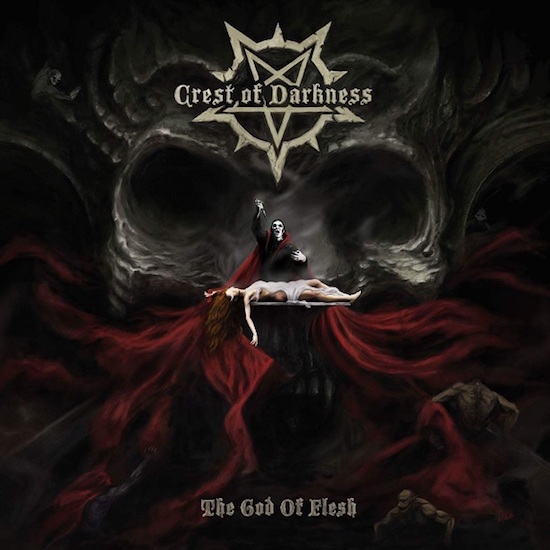 Crest of Darkness has come a very long way since their conception in 1993. Frontman Ingar Amlien has been the force energizing the glistening emblem through the eras of black metal. Amassing 8 albums and 2 EPs sharing the damned sights, Crest of Darkness has been ever loyal to the genre and in return has garnered the respect of many worldwide. Though buried within the fat of a growing mainstream medium, the band has found fortune and prosperity by way of their traditionalist approach though stepping slightly out of the 1st wave black metal circle by adding the widely phrased term EBM. The rusted sword of the old guard has longed for the moist and scent of red iron; now revisiting the anvil of cursed enchantments, the Norwegian blade is once again active, unsheathed and positioned to strike at the jugular. Dreams, visions, nightmares, call them what you may, Crest of Darkness' sonic frequency awakens the slumbering penial to experience both pleasure and pain within their blood-stained domain.

Over the years Crest of Darkness' sound has been primarily raw even while having incorporated keyboard synth and female vocals on some installments. Those aspects of a band far past maturity to approaching eldritch stature, proved to be key ingredients that acted in conjunction with their base musicianship. Thinking back to The Ogress, Evil Knows Evil, Project Regeneration and Sinister Scenario, Ingar and his coven sought out and were successful in mixing the auras of predominantly 1st wave black metal with its 2nd wave form, rock, symphonic Gothic metal and aggro-tech (to a degree). The result of this however did not negatively affect the music Crest of Darkness made, though heavily lamented the absence or diluting of these cornerstones would be; in opposition, the sound of the band whilst taking on a less glossy, epic and multilayered approach not only opened the members to more critique but remained acceptable by their supporters. The decision to take this step could have proven detrimental to Crest of Darkness' identity but having Ingar as the lead whilst being aided by extraordinary musicians saw them dodge the blade of excoriation. Granular remnants of their earlier days can still be traced within the band's current formation, thus showing some considerate measures to not completely abandon the loyal listener and more so, their selfhood.

In an interview/blog, I recall Ingar stating the sound on The God of Flesh would be raw and reminiscent of a live performance and such is the case. Evil knows Evil comes to mind during analysis of all fronts, hence one might be led into believing The God of Flesh is a throwback to Crest of Darkness' early past, but not entirely. It becomes apparent with the introduction of the title track 'The God of Flesh'; that bassy, rich production value is nonexistent as on later installments; in turn opted for primal, sharp, treble-heavy waves. The guitars take up dominant roles as one would expect given such an un-garnished approach; loaded with phenomenal leads and solos, Rebo anchors the music at coordinates synonymous with accomplishment. His guitar work and tuning evoke Give Us the Power to Do Your Evil, while his playing being picturesque in portraying a barren land or desert aura returns. His methods are diverse too; 'Endless Night' (which by the way has the most melancholic segment I have ever heard on a Crest of Darkness record), uses multiple tones, tempo changes and techniques all folded into one composite structure offer gratifying and favorable strung together sections. In addition to Rebo's veteran solo work on the album, there's a phenomenal bridge to 2nd wave black metal that steals the spotlight on the 'Endless Night'. Still there's technical robust in his playing as he's able to squeeze out intricacies before during and after transitions. 'The Child With No Head', 'The Spawn of Seth', 'Euthanasia' and 'Godless Evil Eyes' features Rebo's best work on The God of Flesh as I see it, in turn reinforcing how strong the band still is even as primarily a 3 piece.

Ingar does a great service to his audience through his bass work that has always been lauded as being among the fastest, most precise and best in the industry. It does not have the same register in the mix as on prior albums, still there is audibility sufficient to enjoy and examine (for the technically inquisitive). However, when I first discovered Crest of Darkness it was Ingar Amlien's vocals that drew me in. His aggrotech style of delivery fused with the black metal rasps and screams gave the band a sound of their own and served as good measure in representing his fandom of vampirism. Seemingly impressive and valuable to the existence of the band lies with his vocal sustainability. Throughout usage on albums, they have not appeared to dwindle or lose its impact, I would even argue Ingar's voice on The God of Flesh sounds just as good as on Project Regeneration and Give us the Power to Do your Evil. Ingar's vocals are able to convey his draconian and enigmatic visions suggested by the song titles. As on the topic, I don't know why he explained the lyrical content of the songs through a video posted prior to the album's release, he was even descriptive of his discomfort in doing so as he prefers the listener to manufacture their own interpretations. It may have been a request by the label, I would have preferred that not to happen. Either way nothing is lost through art's subjectivity.

Bernhards drumming is on par with all other aspects, again a bit less of a punch through the emphasized treble yet not enough to inundate its vibrancy. You can tell his comfort when playing in Crest of Darkness has escalated since joining the band in 2014. His transitions and pacing appear a bit more relaxed now that he has grown accustomed to the ways of the beast. 'Godless Evil Eyes' and 'Salvation in Hell' are for me the true highlight of his technicality, groove and tempo manipulation as they show how much more confident he has become in executing some of the higher challenging sections on the record which by the way I understand was recorded live thus adding to his credentials. Only his second full length record with Crest of Darkness and you can tell of his conviction; a much welcome and deserving drummer he is.

The God of Flesh flows well, no stagnation occurs, much of which is attributed to the knowledge and chemistry shared within the small unit. However, by adding the delicate keyboarding touch of Kristian Wentzel, the music runs like a fountain or stream of serenity. They're not heavily accentuated within the recordings as I would have preferred but through their underlying locale, the songs emit a sense of lucidity therefore making the music easy to follow. 'Euthanasia' and 'The Spawn of Seth' are the pieces most telling of this as the synth introduced provide an imaginary runway of sorts facilitating the poised sway of other instruments. Fabulous work by Kristian, hence I hope he is given a dominant role for future releases.

The God of Flesh is traditional to a degree, but still is able to encompass most aspects of a 26-year-old Crest of Darkness. Even with the absence of some female backing vocals preferably those of Kristin Fjellseth, there is still much the band offers on their milestone of an album and Ingar's tormented visions.