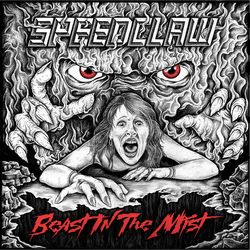 Once again, I received an e-mail that told me something about a "highly anticipated" new album of a band I did not know before. Speedclaw from Croatia? Who? However, I have learnt that Croatians can play football very well (please don't mention the downfall of the German team) and so I thought they will also be able to play metal. The e-mail gave me further hints. "Speedclaw still embody all the energy of the early '80s", for example. Well, very early eighties, because the energy of the band is combined with a certain naivety. Sometimes speed metal in its purest form lacks evil, although a certain viciousness is mostly welcome. However, the dudes focus on the traditional speed metal tools. This means that the songs are guitar-dominated, riff-oriented and, naturally, driven by fast-paced drumming. But they lack this quantum filth that speed formations like Baphomet's Blood integrate almost perfectly.

The playtime of the EP is longer than that of some so-called full-lengths. Already this fact indicates that the single tracks are based on a good foundation. Maybe the final kick is missing, but everything, the riffs, the solos, the vocals and so on, is well executed. I am no big fan of Maiden-esque instrumental parts and some of the tracks offer, among other things, exactly this kind of sections, but this is not to say that Speedclaw do their work in a flawed way. It's just a matter of taste whether or not one likes the more devastating form of speed metal.

Naturally, there is still room for improvement. "Rising of the Claw" starts with a good riff and straight up-tempo rhythms, but it derails during the meandering instrumental part. The loose and aimless guitars tell me to go to the fridge and get something to drink, because there is no need to give special attention to this section. Anyhow, this unfittingly relaxed sequence does not really bother me. These guys are still at the beginning and they have the potential for a future development. Their clearly structured songs mirror the thoughtful approach of the musicians and so tracks like "Beast in the Mist" or "Aggression Strikes" just make fun. The mixture consists of roughly 75% speed and 25% traditional metal and the warm yet vigorous vocals, the abrasive guitars and the cleverly arranged tempo changes constitute the main pillars of the material. Not to mention the production. "Beast in the Mist" sounds very professional, clean and robust. Even the stereotyped artwork does not suck. Thus, if you like to get a couple of good, speedy songs from the country of the vice world champion, try to find the beast in the mist, rescue the girl from its clutches, make love to her and listen to this output. Meanwhile, I will look for a physical copy of the EP.