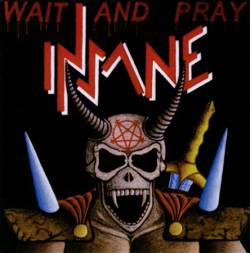 Imagine a band that copies "Show No Mercy" with every single note, although it plays own compositions. You say this is insane? You are absolutely right. This is Insane! These maniacs from Italy are the greatest fans of Slayer's debut the world has ever seen. The opening drum beat is taken from the beginning of the title track of "Show No Mercy", the sound of Wait and Pray is geared to the classic from 1983 and the last track of the first half has a double name ("Die in Hell / Metal Torment") that reminds us of "Metalstorm / Face the Slayer" from... well, how many times do I have to write the words "Show No Mercy" in this somewhat strange review? And don't forget to compare the letters of Insane's logo with those of Slayer.

The real joke of this joke is that the Italians wanted to be taken seriously. There is no ironic twinkle in the eye of the artists. The album just reproduces the classics of Slayer in another form, but at least two things are laudable and exciting. On the one hand, Insane have written autonomous songs, albeit each and every riff, each and every lead and each and every note builds a very stable bridge to their role models. It's not easy to praise your idols while offering own compositions simultaneously, if I am not mistaken. On the other hand, the eight tracks of Wait and Pray are almost on a par with "Evil Has no Boundaries", "The Antichrist" and so on. The album was released in 2005 (Slayer's latest album was the terrible "God Hates Us All" at that time) and maybe the Italian trio was on a mission in order to remind their Gods that energy, straightness and purity were those values that Araya and his friends had long forgotten. Either way, the material sounds fresh, stimulating and contagious. Vitalizing highlights like "Four Magicians" or "Evil Is at Hand" have anything it needs to enthuse old school thrashers, because they offer fantastic riffs, a good drive and this quantum of fanaticism it needs to be an authentic thrash formation.

Needless to say that the lead singer is totally familiar with Araya's emphasis and phrasing. The wording also lies in close proximity to Slayer's big bang. The first line of the opener ("Serving the hell we obey to the end") is as programmatic as "Blasting our way through the boundaries of hell" and the artwork is ornamented with the buddy of Slayer's crude warrior who looked so ultra-mega-evil on the artwork of the mother of all blackened thrash metal albums. But I want to say it again: Insane also offered very strong own ideas, because there are no obvious parallels between their song "x" and the song "y" of Slayer. They just have picked up the vibes and the structure of the very early Hanneman / King material, and so they present new riffs and melodies that just see no sense in hiding their inspiration. Maybe the dudes are painfully consistent, but they do not lack musical skills, compositional talent and veritable integrity. All songs hit the bull's eye and despite the non-innovative verse-chorus-verse-scheme, they avoid lame designs. Inter alia the dynamic of the effective solos gives the tracks a powerful touch. Not to mention the fact that the average velocity of the compositions is more or less breathtaking. If you like to have reasons to like yourself, buy "Show No Mercy Part II", also known as Wait and Pray. Too bad that the dudes never released a further full-length.