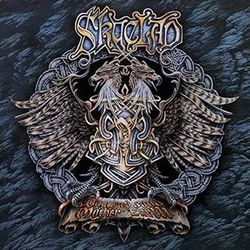 The story of classic British thrash metal is a tragic one. So many promising bands - Slammer, Xentrix, Onslaught, Deathwish, Pariah - and so little outcome. Stamina was definitely no friend of these formations and compared with the long-lasting lives of their German competitors, almost each and every thrash band from the UK draws the short straw. And I haven't mentioned the most promising horde so far. Sabbat, the band of a dude called Andy Sneap and a lead vocalist namely Martin Walkyier, catapulted themselves into a top position with their first two full lengths, even on a global scale. But what happened? Walkyier left the band, their third album became their last one, probably inter alia due to a partially modified style and pretty harsh reviews. Skyclad became the new playground of the renegade, but this band soon made clear that it was interested in a broader portfolio. To play "only" thrash metal was not enough for them, but The Wayward Sons of Mother Earth is still mostly based on thrashing elements - and that's a good reason to like this debut.

All highlights of the album from 1991 rely on a thrash metal foundation. 'Cradle Will Fall' is kicked off by an inspired guitar solo that leads to rasping guitars and intense melody lines. Dynamic tempo changes increase the lively overall impression and the band finds the perfect balance between harmonies and harshness. But it is Walkyier who crowns the song with his excessive lyrics about the arrogance of mankind. His excellent lines deserve the highest praise..."But the time has come for us to realize / That the animal instincts we deeply despise / Are far more civilized than humanity ". I agree. The elegantly titled opener 'The Sky Beneath My Feet' starts with smooth guitars that do not lack sharpness simultaneously. An aggressive piece with pinpoint riffs expresses the most vigorous facet of the formation, not only due to the comparatively high velocity of this number. Needless to say, that the lyrics reflect Walkyier's thoughtfulness once again. The less furious yet still heavy and robust 'Trance Dance (A Dreamtime Walkabout)' also hits the mark, especially due to its overflowing instrumental part at the beginning.

The remaining material cannot maintain that superb level of quality, but it indicates the high degree of Skyclad's individuality. Songs with a folkloric touch and unusual instrumentation, piccolo, violin and tambourine, if I am not mistaken, do not celebrate the pure thrash dogma. But apart from stylistic drawers, they have good melody lines, are coherently designed and do not kowtow to any commercial considerations, while a rather strict and attacking track like 'Our Dying Island' does not find the optimal flow. Anyway, I don't want to be too picky; generally speaking, The Wayward Sons of Mother Earth is a fascinating first statement. By the way, this title marks a good description of the band, especially in its early days. Anyway, individuality is good, but good songs are better and therefore it is just great that Skyclad win on all fronts. Only the overly reserved and calm 'Moongleam and Meadowsweet' falls through the cracks, but that's forgivable. The positive facets clearly dominate, even the production with its great guitar tone and the slightly dark touch during the thrash-oriented titles contributes to the success of the album in a remarkable manner, albeit it does not score with an overdose of transparency. So, what, the overall impression is still very strong. Doubtlessly, the story of British thrash almost makes me cry, but the here reviewed debut tells very good tales. No wonder as long as you know the one of the best lyricists on your side.