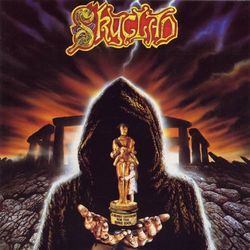 A Burnt Offering for the Bone Idol - this title appears as an omen for the excessive lyrics of the man with the overflowing pen, also known as Martin Walkyier. I confess I thought that his name is inseparably linked with Skyclad, but history told me that I was wrong. However, on the second album Walkyier still played the main role. His thousand words per song became a trademark, but not the only one. Skyclad were shaping their pretty individual style and they did it in a remarkable, multi-layered manner.

The album has a darker touch than its predecessor, or am I just biased by the fact that Adolf Hitler's martial voice shows up in the intro? Either way, A Burnt Offering for the Bone Idol reflects the thoughtfulness of the formation. Lines like "So many causes I could die for - but I don't know which is right" speak volumes. Maybe the band overemphasized its more or less intellectual approach, because the stormy elements that characterized the highlights of the debut were on the retreat. This does not mean that the full-length lacks heaviness. Of course, there is an absolutely superfluous acoustic guitar number, but the debut had a comparable piece. Apart from this throwaway track, the band swings the axes and the pushy fiddle also tries to rock as good as possible. Nevertheless, the impulsive approach of songs like "Sky Beneath My Feet" is missing.

But no need to cry - the vast majority of pieces scores with an enormous substance, effective guitar lines and comprehensible yet exciting structures. The folkloric elements do not gain the upper hand. Okay, the booklet of the re-issue announces that the band "created the folk metal genre single-handedly" and I agree that the somewhat quirky formation made its contribution to the birth process of this style. Nonetheless, here the metallic components dominate and the pretty opulent instrumentation - mandolin, violin, keyboards - does not cause damage. Quite the opposite, Skyclad combine all contributions in an impressive way. The full and comparatively warm sound puts the songs in the right light, the predominantly melancholic closer as well as the more vigorous tracks. "Spinning Jenny", maybe the most prominent song of the band, also profits from the well-succeeded sound, but the most impressive pieces are songs like the fatalistic "A Broken Promised Land", "Salt on the Earth (Another Man's Poison)" with its oriental beginning and the galloping guitars or "R'vannith" which scores with clearly defined riffs.

All in all, Skyclad manage comparatively complex patterns without neglecting the flow of the songs and this makes the album very accessible. Any kind of awkwardness does not show up, the experience of the musicians results in strong and expressive pieces. By the way, it's sad to know that Keith Baxter is already dead, R.I.P. - but it's a small comfort that the more or less innovative music of Skyclad lives on. And now I try to memorize the lyrics of this album... guess it won't take long - maybe I'll be back in roughly two years.