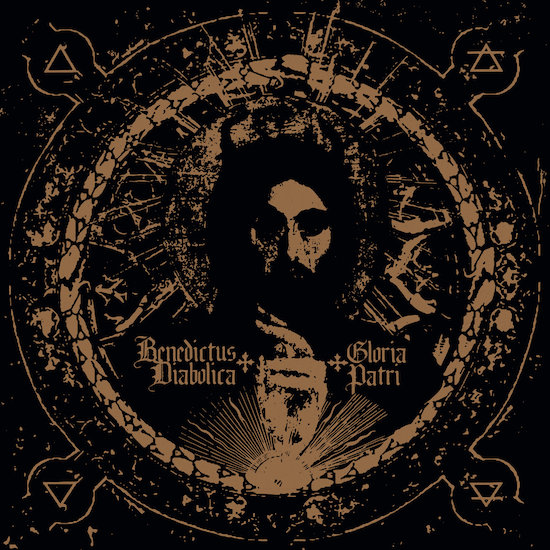 Ancient Moon is one of those projects which like to hide under a veil of mystery, presumably to create an aura of obscurity, which always help to reinforce its musical proposal. In fact, I don’t know a lot about this international project composed by three musicians whose names remain unknown to the general public. Ancient Moon was created in an unknown place and date, and the first thing we know is that they released a quite competent debut entitled Vvltvure, back in 2015 with the Russian underground label Satanath Records. That debut showed the love of the band for long songs as this debut was composed by a single mammoth song which almost lasted 30 minutes. Now, four years later and after a split album released in 2018, Ancient Moon returns with its sophomore work entitled Beneditus Diabolica, Gloria Patri.

Beneditus Diabolica, Gloria Patri is another dark ritual consisting of two long tracks, each one clocking around 17 and 20 minutes, respectively. Ancient Moon plays a very dark form of atmospheric black metal with a distinctive murky and obscure production, which fits perfectly well what this dark incantation wants to be. The album needs to be listened in its entirety as the band creates long pieces as a part of a unique tenebrous ritual, where each instrument and arrangements has a sole purpose, to build a dense atmosphere which wants to captivate the listener in an immersive music experience. The aura of mystery evolves both compositions which have long atmospheric sections created with keys, organs and other instruments, showing the skills of this musicians when they have to compose music with a strong sense of atmosphere. Pace wise both tracks have a general mid-tempo style, though thankfully the pace is not monotonous through the whole compositions, as both songs contain some faster sections adequately mixed the aforementioned ambient sections, slower and the most common mid-tempo sections. The guitars have a murky tone, though the production can be considered good and well balanced, they even have a certain dissonant tone which fits the ritualistic chaos of these compositions. Their role in this album is quite relevant and they are certainly a strong point, as they sound well composed and with distinguishable melodies and a welcoming variety. This notorious role is shared with the already mentioned keys, which have a sole leadership in certain moments, as in others they are the perfect companion of the guitars. Sometimes, they appear in the front, like in the ambient sections or when the organs appear like for example in 'Benedictus Diabolica, Gloria Patri Pt 1' and in other sections you can find them more in the background. Anyway, they are never overrepresented as they appear in an adequate quantity. Alongside the guitars and the keys, the vocals have also a strong performance, and as it happened with the instruments they adequate their tone and style to the different sections achieving an excellent result. The vocals can sound at times with a clear black metal style with those shrieks, while they can also have a death metal touch as they adequate their style to a lower and cavernous tone. In certain moments they also remind me Attila Csihar’s very personal and unique vocals. One of the best moments is when they introduce choir esque vocals, which fit perfectly well this kind of ritualistic black metal and are, in my opinion, one of the best moments of this album.

In conclusion, Benedictus Diabolica, Gloria Patri is undoubtedly a quite strong second album and the best compliment I can say about it is that it achieves to create the ceremonious, murky and perturbing atmosphere that the band wanted to beget.

It's the number 1 reason Iron Bonehead Records is the best record label (for me), the musicians existing under their umbrella carry with them a definitive attachment to the occult. Not only do they bring the ritual to the turntable, but the music used as a tool to forecast the journey is as important and pleasing as the rituals. Stepping before the lit candle is Ancient Moon with an accumulation of members native to Belgium, France and Switzerland. As for the actual identity of the individuals involved, no one knows but themselves; they exist under one letter names being J (bass, keyboards, vocals), B (drums, vocals) and O (guitars, vocals) further adding to the mysterious aura of their corrupted steel. After having released their debut full length in 2015 titled Vvltvre which was then followed by a split with Prosternatur being Secretum Secretorum in 2018, they return from the abyssal realms with horrors and an even more terrifying presence, this time under the sigil of Benedictus Diabolica, Gloria Patri. Comprised of 2 lengthy psychic occurrences aptly self-titled. Two celestial monoliths expanding cracks in the void to excavate its most prestigious elements. This is black metal, it shows no limits to the depth of the dark philosophies and teachings, it loads the cannon with impurities and blasts it at you.

Riffing, drumming, chanting and throating flirtatiously to the obscurity of the genre, Ancient Moon remind the listener that black metal is for the mentally unchained, those who walk the path of enlightenment, the witches' ascendancy stairway to truths and unspeakable pleasures. With bouldering thumps of the drums, trancing guitars and sung chants among the palette of resonance, Benedictus Diabolica, Gloria Patri can be compared to the honorary class of releases from covens active within the Helvetic Underground Committee. Though I am not aware if Ancient Moon is fronted by members of such an esteemed establishment, I do get the feeling they are indeed apart of such judging by the scope and methodology of the ritual trance administered here on Benedictus Diabolica, Gloria Patri. Hence the music is vibrant and is stitched to last; shaking sounds of the drums crack the foundation while a cloud of rhythms harnesses the power accumulated to mend the music. Violently climaxing yet soothingly calm at times, Ancient Moon bring to life contrasting excellence while creating anathematizing harmonies on Benedictus Diabolica, Gloria Patri.

Impressive is the least I can say about the mania heard here, they go beyond giving just another black metal record; instead, feeding the cauldron with the antique essences of the genre. I could see this sharing the same salutations as Finis' "Visions of Doom", or Lykhaeon's "Ominous Eradication of Anguished Souls" as a testament to how adeptly the workings are being executed. I hope there will be more to follow given the pleasurable quality of the music on Benedictus Diabolica, Gloria Patri and it's accompanied paraphernalia; yet another privileged offering to the altar of black metal which has seen many fail to even reach the coveted temple through feeble attempts at what they call 'music'. Could not be happier the members within the space of Ancient Moon have not been identified; that layer of obscurity is reinforced and leaves the band and Benedictus Diabolica, Gloria Patri open to much speculation by supporters, something that has been largely absent within the genre. This is a solid entry that has deeply inscribed the trademarks of a professional entity committed to maintaining the well-being of black metal.