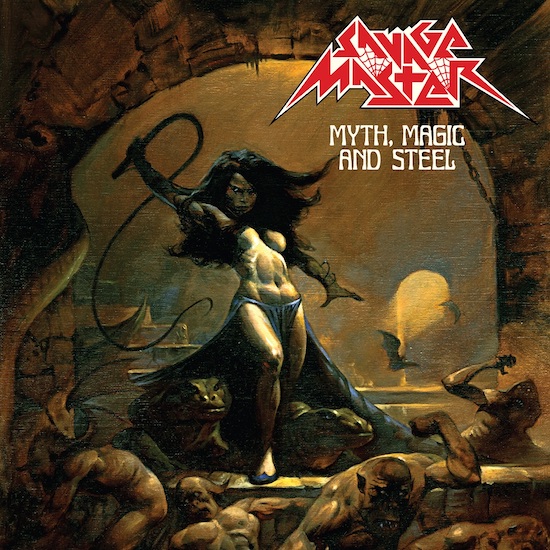 Some time has passed since I’ve had the chance to really sit down and listen to some traditional heavy metal. You know being stuck under the black/death metal rock can be quite a strain to creep out from time to time but hearing so many good things about upcoming releases from bands in the trad-metal genre and specifically about Savage Master gave me the will to pull from the weight of barbarity. Fronted by Stacy Peak (vocals) and supported by Larry (guitars), Adam (guitars) and John (drums), this Kentucky based heavy metal quartet has been wielding the old iron sword since 2013. With their debut Mask of the Devil being put-out in 2014, Savage Master gained decent traction within the lower regions of the metal spectrum. Since then 2 EP's and another full length had been released, that again, received favorable reception from the underground activists operating within the heavy metal genre. Soon to be released through Shadow Kingdom Records on October 25th, 2019, Myth, Magic and Steel sees the band revisit the anvil in an attempt to forge yet another enchanted piece of weaponry.

Many a modern traditional heavy metal band have come and gone but few still remain taped to my mind, would Savage Master be one of those? Enforced with 9 tracks and just over 41 minutes, Mythic Magic and Steel could easily be one of the best heavy metal records released in 2019. I’ll say for still a young band and being relatively new to me, they are becoming one of my favorites an even ‘go-to’ for modern age - traditional heavy metal. Mythic, Magic and Steel has most of what peaks my interest for this sub-genre of music; fiery vocals, properly organized breaks, choruses and transitions, great guitar solos, audible bass tone to keep the gasoline flowing and a bit of the occult mystique, plus lots of feeling to go along with it. I have not taken the time to listen to their entire discography so I can't compare this to their predating work, but I can say Mythic, Magic and Steel is a joy to absorb in its entirety.

Looks like modern bands are really putting on a spectacle lately in the heavy metal genre and Savage Master is no exception; ‘Myth, Magic and Steel’, ‘The Devil’s Ecstasy’, ‘Flyer in the Night’ and ‘Lady of Steel’ charge full-on and high on an overdose of mana to create headbanging memorable tunes filled with themes of conquest, victory and lechery. Peak’s voice is just right, has a raw sound that gives character to the songs when she performs the high, mid-ranged and low notes. That's important, and it's through this I can see why Savage Master are such a big deal and so accomplished even for such a new group. Along with her executioners, the band channels a lot of the music here which mounts to relatively spectacular heights given they manage to create a record that feels thorough and not like a summation of leftovers. Good tunes are on here, perfect for the fading sun on a twilight afternoon trickling deep into the midnight; doom inspired tracks like ‘The Owl’ and ‘Warrior vs Dragon’ make evenings on the porch with your feet up drinking beer an even more pleasurable experience.

Just can't get enough of these hymns, I’ve probably listened to Mythic, Magic and Steel about 7 times consecutively. Songs here are very catchy and also packed with pungent guitar leads and solos, viable drumming and bass. The opening track ‘Mythic, Magic and Steel’ sets the tone for what’s to follow, and with honors, the tracks down line offer the same dedication and spirit. No matter the song-length, from the short and swift ‘Lady of Steel’ to the lengthy battle tale of ‘Warrior vs Dragon’, you will come to enjoy Mythic, Magic and Steel with every new session spent. Mythic, Magic and Steel is yet another estimable offering that celebrates and exalts the dominion of heavy metal.