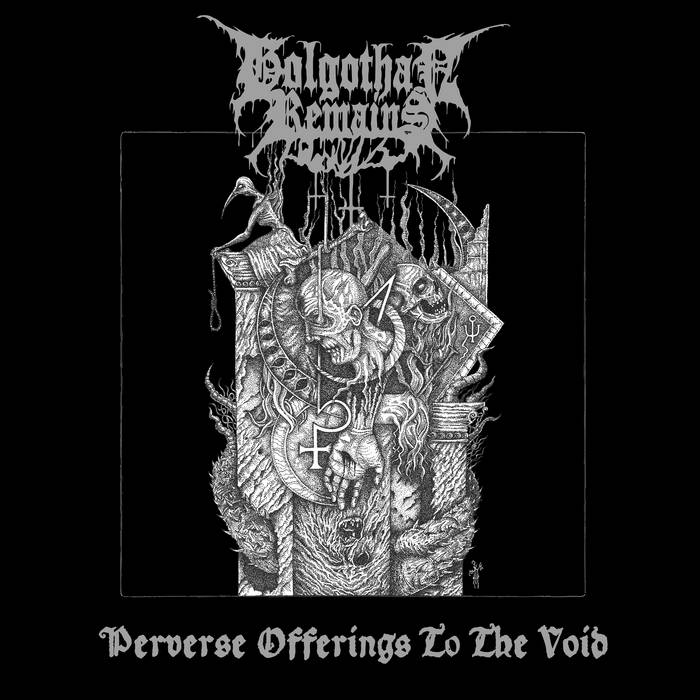 Death metal, for all the good and bad in it, is a genre that manages to prevail as many bands find ways to keep it fresh and unique, or bring their own twist to the proven formula. Since most people are currently focused on the revivalist trend, a different trend that has been going on for even longer (and is influenced by New York bands Incantation and Immolation, and then popularized by the Greek horde, Dead Congregation) is coming to the surface and that style being the raw and blasphemous style of death metal with some elements of doom, and an underground attitude.

Australia is also a major breeding ground of this style that seems to be the bridge between death metal and war metal, and today we're focusing on the debut record by Australian blasphemers Golgothan Remains, titled Perverse Offerings To The Void, which was released independently in 2018, later reissued on vinyl in 2019 by Sentient Ruin Laboratories/Nuclear Winter Records and now back on CD via Nuclear Winter Records. Golgothan Remains play the Incantation and Dead Congregation brand of blasphemous death metal. The thick and heavy style with atonal riffing, frenzied tempo changes and demonic death-growling, and while I wouldn't call Golgothan Remains a worship band, the influence is certainly noticeable. That's really the only real issue with the album, and even then since this is their debut, it's not that big a deal since they have the chance to improve and evolve. With that said, where Golgothan Remains do differ greatly from their clear influence is in their songwriting and even the performances. The music has a distinct punkish groove from the get-go that's fairly uncommon for death metal, but the band manage to make it fit into the death metal sound. The technical instrumentation like the guitar and bass tone, the drumming, and the overall ambiance has that thick and down tuned death metal quality, on top of that the band also manages to have slower and even atmospheric sections that seamlessly flow from the more intense and faster sections, or close the songs to open a more savage track. One such case is the interlude sixth track 'Void' which bridges the technical and atonal track 'Phantom Earth', with the more raw and faster track 'Timeless Eradicator' and that's another interesting element of the music. The band have a very well executed balance between pure blasphemous death metal and very avant-garde and technical leanings that are reminiscent of bands like Portal, Ulcerate and Demilich. And at over 30 minutes, this record manages to be accessible enough for new listeners and without sacrificing the extremity and, for lack of a better term, "underground cred".

The final noteworthy aspect to mention is the production. While many death metal bands in this particular style favor and even thrive on a grimy, bass heavy mix, the sound on Perverse Offerings To The Void is somewhat polished, but, given the more unorthodox and technical elements in the music, the more polished production actually benefits them, and the band still managed to have enough grit in their sound to not be a "experimental" band. Overall, Golgothan Remains released a debut that checks all the boxes a debut should have, while it may be a tad derivative in some respects, it's not to their detriment, and also managed to deviate from the norm to their advantage and as a way to keep developing in the future.