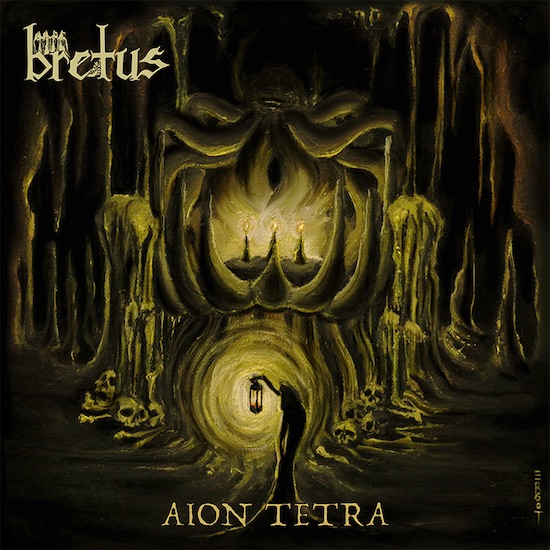 Hailing from Italy, Bretus approach the stoner/doom metal void with their 4th record, Aion Tetra. This is not your played-out stoner/doom metal that is often accompanied by that annoying fuzziness, instead an epic heavy metal overtone is used to build the songs up from a flattened, worn-out, generic staple. Being one that is selective about doom metal, I was not very interested in Bretus as they play stoner/doom, thus I know what to expect most times, but hearing they are an Italian band quickly caught my attention. For me it has always been the Italians that have mastered and are kings of the doom metal arena even though there have been commendable acts outside the region, thus I had to hear it. Aion Tetra is like H.P Lovecraft tales being narrated over epic heavy metal supporting music with a pinch of that Lucio Fulci theme music eeriness we love. Aion Tetra is not only true to the genre, but it stands amidst the modern essentials of epic traditional doom metal.

The vocals on Aion Tetra is something to behold, the frontman’s delivery is an amalgamation of epic doom metal singing that comes with a pinch of punkiness, anger and a Glen Danzig sort of tone. Zagarus’ method of singing is nothing short of outstanding, these vocals add to the atmosphere of the instrumentals laying down that creepy conjuration home to the genre. ‘Third Eye Mystic’ is a thrill of a ride, painting a canvas stretching to touch the mystical remnants of the earliest and most revered doom metal recordings (Black Hole - Land of Mystery, etc.), and mixing them with a groovy epic stoner/psychedelic/doom metal hue. Aion Tetra appears to be a unification and celebration of most doom metal sub-genres; ‘Prisoner of the Night’, ‘Deep Space Voodoo’, ‘Cosmic Crow’ never let up on the pressure applied, every song is an exhibition of well thought-out compositions utilizing traits of the doom metal landscape to form combinations suitable for any unyielding doom metal junkie.

After deciding to give the music a chance I found a promotional video for the song ‘Third Eye Mystic’. What a fantastic tune filled with samples cut from cult horror movies; Bretus was already speaking my language and that was barely a preview. Then going from sample to full-length was all the more impressive, what was heard on ‘Third Eye Mystic’ was inserted with an exclamation mark into every song on Aion Tetra. Bretus’ understanding and capability to borrow different aspects and present them in a thorough way is commendable as most are well aware of what stoner/doom sounds like and how susceptible it is to inducing boredom. Though the characteristic is present on Aion Tetra, Bretus appears to substitute the extant apparatus to the side in favor of interesting and far more compelling songs as an adversary of what would have happened had they stuck to the routine of stoner/doom metal.

Listening to modern doom metal comes as mostly a chore to me, but it’s bands like Bretus, Windhand, Tombtoker, Capilla Ardiente, Monasterium, Evangelist Dautha etc. that emphasize replay-ability. Aion Tetra is perhaps my favorite doom metal album of 2019 so far, every new session spent listening is more rewarding than the last. Like finding a puzzle box that reveals a new compartment as you spend time with it. Aion Tetra is Bretus’ 4th full length album thus I am interested in their past works after being fortunate enough to make contact with their latest entry.