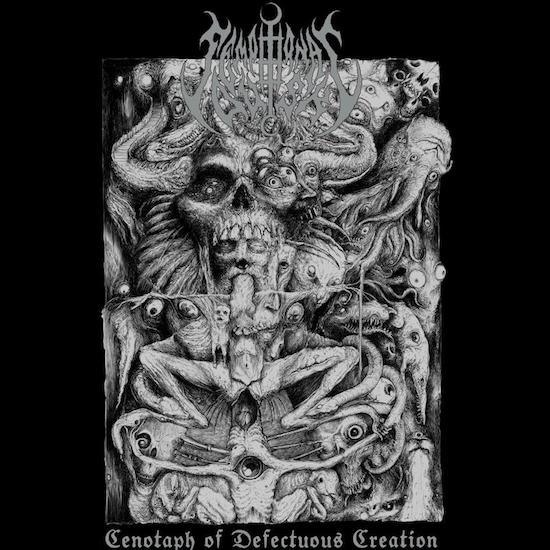 Oregon’s Sempiternal Dusk have slithered from the darker abode of death metal with their newest and easily their best record to date Cenotaph of Defectuous Creation. Having had the pleasure and fortune of hearing their self-titled full-length release some 2 years ago, it came as a surprise that their name had not gained as much circulation and traction within the death metal underground as I would have expected. 2014’s Sempiternal Dusk, though a commendable introduction to the band, steadily pointed in the direction of greater heights waiting to be mounted. 2014’s foot forward was merely the finalizing and initiating of the foundation brainstormed on their 2012 demo. It showed a purposeful unit that were more than motivated and competent at playing death metal with deep incisions of moderately paced doom metal. Hearing that entry brought to mind the likes of Krypts and Spectral Voice, eventually my interest in what was set on the horizon peaked. The precision achieved on Sempiternal Dusk signaled a functional class of death metal enthusiast playing to achieve a shared goal; a goal that would proceed to challenge the discipline and dedication of the vessel. 3 split albums following the supplanting of their polluted pod, a new cavity has emerged with the intention of mutating the band’s sound by inculcating a monastic depth of concentration on atmosphere and climax. The seed planted has now met the season of germination; its nascence accompanied by an espoused spirit of lawlessness and agitation, clinging to the soul like an ethereal parasitic body being nurtured, while conducting the morose motions and advances aimed at the unsuspecting.

To push the bar set by 2014’s output, Sempiternal Dusk would need to prove they have evolved as musicians; their song writing would need to convince the listener/s there is much more to offer in an attempt to supersede their self-titled effort. Tim Call would be leading the march once again with drum and vocal duties being laid before him and energized by the rumpus riffing of J. Hüss and Vince B, the drawing board would be revisited and reworked to some degree with the aim of taking the new record and more-so the band to an elevated status. With the underground bursting with talent, the pressure of competing against the bigger cannons residing on Dark Descent Records and other outlets would also be factored in, thus, directly affecting the quality of Cenotaph of Defectuous Creation. This sect of 3, comprised of members active in notable bands; particularly Weregoat, Mournful Congregation, and Terror Oath, would be put to the test of leaning forward against the monoliths of the sub-genre. Thus, Sempiternal Dusk were compelled to play their best hand at a vital time in their musical journey; and such is the case with Cenotaph of Defectuous Creation being the final outcome. Ginormous vocals crash onto the palate, while a seeping milieu of trepidation is sprawled across the crooked landscape via stringed lynching’s and an oppressive hand on the drum kit. Dominated by the drive to outdo themselves, Sempiternal Dusk utilize escalating waves of tempos that feel the piercing pinch of melodies maneuvering and vilifying the towering body of death/doom metal. Unnecessary ends are clipped, making the record a shorter, well compacted piece for auditory consumption; the production though somewhat similar to the first full length is given a boost in volume; and the musicianship, organized and appealing.

Apprehended by the startling might and mercilessness of 'Excavated Filth from Dimensional Incarnations', Cenotaph of Defectuous Creations  without hesitation, applied a scholarly structure of rhythms to create a lasting moment of atmospheric superiority that hovered over the record, directly impacting the crescendo of uneasiness steadily manifesting. The pressure accumulated through the period of ‘Excavated Filth from Dimensional Incarnations’ would prove to be a stabilizing factor for the music ahead, as following entries trace the schematics, provided the model be improved forward-on. The instrumental impalement and lacerations pivotal the least; well-coordinated tempo changes are greeted by heralding riffs and solos; rhythms expand, therefore fomenting a sense of movement and the goal of the music is eventually realized. Though still possessing the signature basics of their self-titled record, Sempiternal Dusk, the members breathe new life of sorts into the capsule; this enriched atmospheric kick rests delicately within the cloak of black metal as a result of the guitar tuning and the hints of tremolo picking on some occasions. These are some of the mechanics acting to shape the final product into an overwhelming success. Cenotaph of Defectuous Creation is a transformative era for Sempiternal Dusk, one that sees them aggravatingly tease the more critical hand of their craft. With this latest installment they have gone from a mere tooth-ache, to a virulent cavity within the necropolis, accelerating the putrefaction during domain construction.