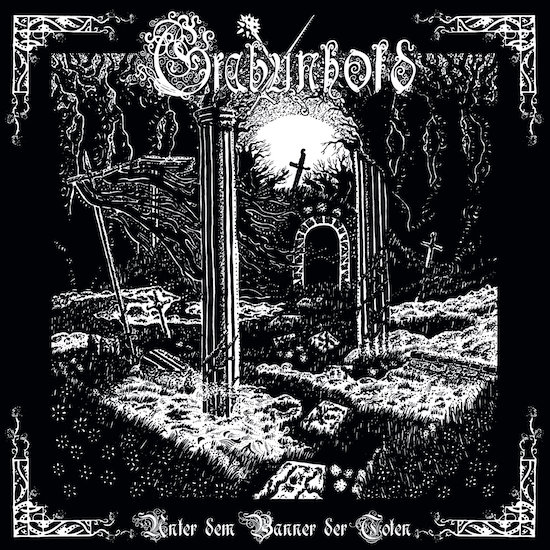 Grabunhold play a medieval inspired style of ‘black metal’ by primarily using Tolkien literature/references. Other bands have used Tolkien themes in their music before so this is nothing new; and in questioning the music, one would say it’s just a few steps shy of falling into the ‘stock’ black metal que. However, during the time spent listening to Unter dem Banner der Toten which translates to ‘Under the Banner of the Dead’ it possessed a very encapsulating feeling though very familiar given it resides within the safe-space of the genre. Yes, there are some instances that may resemble the 1st wave of black metal, however the primary bulk of Unter dem Banner der Toten falls well within the early 2nd wave of the genre, which isn't a bad thing considering how they carry themselves on this latest installment.

The music itself comes across as being a mixture of Taake and perhaps Forteresse (instrumentally), especially on the song ‘Gespenster’ or ‘Ghost’ when translated. On some occasions the instrumentation presents itself as being folk driven but with the added spice of 2nd wave black metal. Wonderful landscapes are painted on each track but the best effort of such comes on ‘Hexentanz’. I think it translates to ‘Witches Dancing’?; please forgive me if I’m wrong, just going with what I gathered from the internet, but that song is so musing throughout and is even aided by some sort of short spoken sample that just revs-up the feeling; plus having no vocals makes the experience an even more absorbing one. Thus said, I find such music to be at its highest effect when vocals are kept at a minimum level and only introduced if having something to share or add. That’s how Grabunhold go about things here, no element is overused and is only brought into effect if seemingly needed or worthy of sharing space with the rest of the music. A bit of melancholy is introduced throughout the run-time of Unter dem Banner der Toten but is more prevalent on the final track ‘Grabunholde’.

Noticeably the drums are fairly audible and the same goes for the guitars; Unter dem Banner der Toten was mixed cleanly, not in an overproduced way, more-so in a considerate manner. Often times in black metal, musicians aim for a sound that is either buried to obscurity or unevenly balanced and that's fine sometimes, but here Grabunhold show that they are making music to be heard and felt, thus insisting the production be adequate for the listener/s to engage and extract whatever it is that’s being presented. Unter dem Banner der Toten is only 17 minutes in length but feels wholesome and cohesive. I think this EP is a good build-up towards a full length; this truly touches the individual/s listening; you really get a sense of being surrounded by castles and lush beautiful landscapes whilst being under the threat of impending danger by necromancers and fiends. If any band can do this-much in so little time, then they deserve to be called musicians. Grabunhold will consume you with their beautiful yet vicious incantations here on Unter dem Banner der Toten.