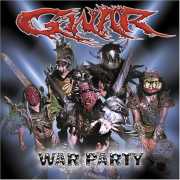 Gwar aren’t entertaining anymore. Their combination of shock, schlock and rock is a decade beyond overdone. Their musical talent has faded to practically nil, assuming they ever possessed any. What’s left are the smoldering remains of a shock rock, one-hit wonder, a bunch of aging thirty-somethings in rubbery costumes, still trying to convince the world that they can be shocking and extreme.

To be fair, this review should be judged on musical merit alone, but Gwar have defined themselves by their theatrics for so long that it’s become more relevant to a description of them than their music.

No wait, this still sucks.

War Party’s music is so completely forgettable, hackneyed and trite that it hardly deserves mention. Much like their ridiculous stage antics, this CD is absolutely scripted and predictable. Gwar haven’t changed their style in a decade. In case you slept through the early 1990’s, back when this band was somewhat interesting, this is an amalgamation of pop-punk and slow American thrash, with a slight Primus/Mr. Bungle influence. Unfortunately, not only has their musicianship not improved, but it’s diminished considerably during the last decade. This is a limp-wristed, impotent parody of metal. The enthusiasm, anger and power that once fueled bands like Scissorfight, Scatterbrain and Gwar themselves has long departed, years before Gwar made this abysmal, worthless record.

At least Gwar had the occasional, redeeming song on Scumdogs of the Universe. At least Gwar had a memorable hit or two on, This Toilet Earth. This album has nothing comparable. In fact, of eleven offerings, only the song, “You Can’t Kill Terror,” is vaguely reminiscent of past benchmarks, “Jack the World” and “Slaughterama.” The moment a song ends, it’s another anonymous radio blunder.

Oops, we’re back to showmanship and bad theatrics. These can’t be ignored for long. This album, in stark contrast to previous albums, features songs about war, killing people, murder and hey, terrorism; at least they’ve expanded their horizons to include lyrics about terrorism. Much like every other Gwar CD, songs like, “Womb with a View,” contain words such as, (and these are not made up) “Your womb is a sewer/your womb is manure.”

Who writes this garbage? High schoolers? Gwar’s grandkids? That crazy lady who shouts at the pigeons downtown? Maybe there should be a disclaimer on this album that reads, “lyrics by Ms. Stevenson’s 10th grade behavior disorder class.”