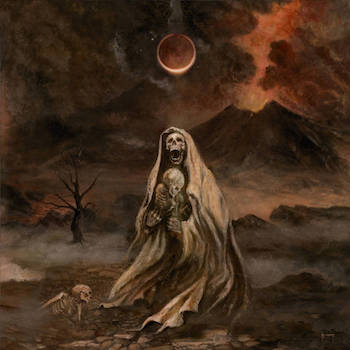 Out of nowhere and featuring an impressive lineup comes Uada from Oregon and their debut album Devoid of Light. Masterminded by Jake Superchi and James Sloan Uada has proven with their debut that they’re one of the most promising new bands in black metal.

In their debut they play a style of melodic black metal inspired by the greats like Dissection and Sacramentum but with musical compositions that are much more layered and complex that makes Uada stand out from other melodic black metal artists. There’s a very strong sense of dynamic compositions and raw brutality that come together in a very pleasing way for anyone that’s interested in this more melodic style of black metal. The standout is the dual guitar work by the band’s cofounders Sloan and Superchi, their riffs and dark melodies carry the lion share of making the album so exciting, displaying excellent skill in switching between aggressive tremolo picking and hooks that are equal parts catchy and complex without sacrificing the atmosphere they set out to create with ease. The drumming and bass work while not as strong as the guitars manage to also do a good job in holding each song together and Superchi’s howling vocals give the album that extra layer of darkness but on top of that, Superchi is able to deliver more than just shrieks, his vocal work is very varied, going from cold shrieks, to echoing howls, to death metal like growls and even Celtic Frost-esque grunts. The final result are performances that are perfectly complemented, nothing feels wasted or buried here and each performer does their job excellently.

But that is not all. Aside from the excellent performances, the album is also a very rewarding experience in that for a small package it’s able to offer variety in its music, it’s not just the standard blast beats and tremolo picking of black metal with more melody. As mentioned before the musical compositions are very dynamic, switching from aggressive speed to a much more somber mid pace with ease. The time signatures are also very varied but what’s more important here is how the band plays around with many times and rhythms but still manage for their album to a cohesive whole and are even able to mix their sound with other genres with ease and without feeling disjointed. The excellent second to last track “Our Pale Departure” has a very doomy intro riff which then leads to a deluge of cold and haunting chaos before going again into a doom metal like bridge and it’s a seamless transition.

However, as good as this album is in its music and the general performances one thing that keeps it from being better is its production, now, for black metal, a rough production is a must or serves the purpose of keeping the authenticity of the music but in here the production hinders the album’s music, there’s a bit too much reverb that makes the guitars sound muted in places. It’s not the worst production in the world but a good mixing and some mild polish could’ve made this album sound much better. Another thing worth noting is that while Uada have a sound that can be considered theirs, you can tell they wear their influences in their sleeves as indeed the music is very reminiscent of melodic black metal bands like Sargeist, the aforementioned Dissection and of course, the band Uada gets constantly compared to, Mgła. That being said, this is their debut album and as such it’s not going to be completely original and there’s enough of the band’s unique sound to make it their own.

Overall Uada are a band that excels and has all the right pieces to be great and this album while sounding familiar in areas is proof of that and worth listening to.